my turn to write
dread.
blog.
what to write?
want Perfect --

-- get lost, bub --
stoopid internal editor
(take that!)
go hound someone else

Listeners of NPR may be familiar with On the Media. I listened this past weekend and found that the program was a rerun, but, it was one I had missed the first time around. There was a variety of stories that are of interest to a writer. You can access the program here, and listen to it in its entirety. Or, you can simply read the part that, as a children's writer, I enjoyed the most. It was a piece about novels written in 12 words! We write tersely for children, but not that terse! It's a real challenge. Read the transcript now, and then go out and write a 12 word story for kids.

Yes, this is an assignment! Please share your work by using the comments section below. Here's one from me:

Yesterday the Sisters did a workshop at NH Library Association's annual conference in Concord. Six of us were on hand to talk about the women we profiled in our newly released book, Women of Granite: 25 New Hampshire Women You Should Know. Our seventh sister, Mur, jumped ship and went to Europe for a little vacation. Imagine that--passing up an opportunity to speak to a roomful of librarians!

Our audience was appreciative despite some hiccups on our part--like me forgetting a few facts! Many of the librarians turned out to be closet writers. I hope we were able to inspire of few of them to pursue their dreams.

Kathy and Andy both came for the entire day and went with me (the librarian) to a few of the other workshops including one on designing promotional materials. It was meant to teach librarians how to make eye-catching posters, flyers, and bookmarks, but the tips presented are usable by anyone. (What writer wouldn't want to create awesome bookmarks?) The workshop was excellent and showed us, albeit too quickly, how we could create professional looking materials using free open source software like OpenOffice and GIMP. We were told it would require a little time and effort to learn, but, from the results we saw, it looks to be worth it.

The Sisters are heading to the Kensington Public Library next Thursday, 5/29, to talk to a general audience about our book. By "general" I mean the audience could be any age; that's one of the delights of library programs, you never know who will turn up. I've done library visits where there were 3 year olds and 85 year olds sitting in the same audience. Wish us luck!

Okay, you've got to remember that I haven't done regular storyhours for a while now, so some of my choices may seem a little dated.

I used many of the original beginning reader type books in storyhours because they had a story that the kids could relate to. Two books that come to mind areThe Best Nest and Are You My Mother?, both by by P.D. Eastman. Then there'sThe King, the Mice, and the Cheese by Nancy and Eric Gurney. This was a silly circular story, and, dare I say it, there was a lesson to be learned--it is better to get along. Of course the lesson wasn't a "hit-you-over-the-head-with-a-hammer" lesson like you'd get with a Berenstain Bears book, and that's why it was perfectly acceptable to both me and the kids.

And speaking of Berenstain Bears, I would never use a book like The Berenstain Bears Forget Their Manners, or The Berenstain Bears Get in a Fight in my storyhours because they were unbearably preachy, and damn if I wasn't disturbed by Mama Bear's being made to wear that godawful polka-dotted sack of a dress day in and day out! (Actually all the BBs wore the same outfit throughout the 27 million books they starred in, but Mama's outfit was truly hideous.) I did, however, love The Berenstain Bears and the Spooky Old Tree. This "Bright and Early Reader" book was FUN. It had repetition, action, and a wee bit of scariness that was just right for 4 and 5 year olds. I would read, "Do they dare go up the stairs?" And all the little ones, with their eyes opened wide, would say, "NO!"

[Here's a little aside: I just looked up the book on Barnes & Noble, to check on the copyright date, and found this description of the book, "A man and a woman meet by chance in a bar. Suddenly, they find themselves fleeing from a powerful agency--the woman hunted for what she knows, and the man mistaken as her comrade in a resistance movement." Whoa! Ya think someone neglected to proofread? Now that would make for one hellavu BB story!] 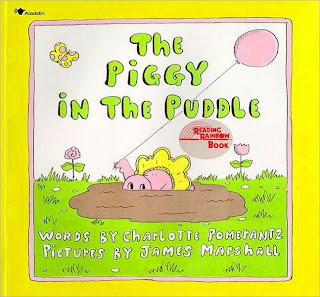 And here are a few other titles that I loved using in storyhours, The Piggy in the Puddle by Charlotte Pomerantz, illustrated by James Marshall, Froggy Gets Dressed by Jonathan London (the first book in the Froggy series, skip the dozen or so titles that followed), The Wolf's Chicken Stew by Keiko Kasza, Three Ducks went Wandering by Ron Roy, and The Doorbell Rang by Pat Hutchins.

What do most of these books have in common? Repetition and humor (or just plain silliness). Hey, I'll leave the "teaching moments" to the parents--the kids and I just want to have fun!

If you're gonna write for children, think about adding a little joy. Joy is contagious! 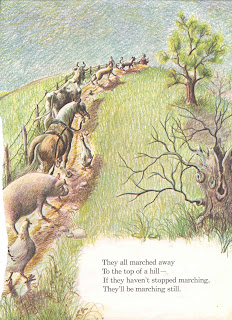 There once was a boy
With a little toy drum--
Rat-a-tat-tat-a-tat
Rum-a-tum-tum.

One day he went marching
And played on his drum--
Rat-a-tat-tat-a-tat
Rum-a-tum-tum.

There are animals. And, there are inherent possibilities to extend the book into participatory action for the kids. Rereading it reminded me of one of my goals in writing picture books--to create something that will work well in storyhours. Children's librarians are great people and I'd love to make their work easier for them!

Alas, when I looked up the title to see if it is still in print, I found it is out of print as a single title, but, I found it is included in at least 2 compilations in the "Little Golden Book Classics" series. Some of the illustrations have been rearranged, and the delightful little map of the parade route is gone, but the story remains (except for a typo!). And, being as I'm a word person, that's all the matters to me!

And the discussion continues...

Earlier this week, I brought up our Mary Dyer vs. Anne Hutchinson debate. Both women were set to be profiled in our next book but the group felt their lives might have been too similar. Evidently, they were more similar than I thought as Janet pointed out the illustration I'd included was not Anne Hutchinson at all, but Mary Dyer. Hmmm... the picture was in the Library of Congress section on Anne. If I'd have read just a bit further, however, I'd have caught my mistake. Just to give Anne equal time, I'm including her picture in this blog entry. Notice the similarities. Notice why The Write Sisters thought we ought to pick someone else to include from the 1600s.

So, it looks like we're going to subtract Anne Hutchinson (there are already a lot of books about her, anyway) and add Ann Bradstreet--a poet and the first woman to be published in the United States. This sets up a whole other issue, however. Our Massachusetts list is full of lady writers and scientists. We need to appeal to child readers who are into music and the other arts. While there are a number of well-known women artists, not all of them fit our criteria. We need someone whose life was suitable for children to read about, perhaps overcame some sort of obstacle to overcome, and easily can be researched by kids. The hunt continues!

In the meantime, we wait patiently for our copies of Women of Granite to arrive. They should be somewhere in the United States this week. We've received good feedback from our early reviewers and are already receiving pre-orders. Very cool!
Posted by Mur at 11:43 AM No comments: 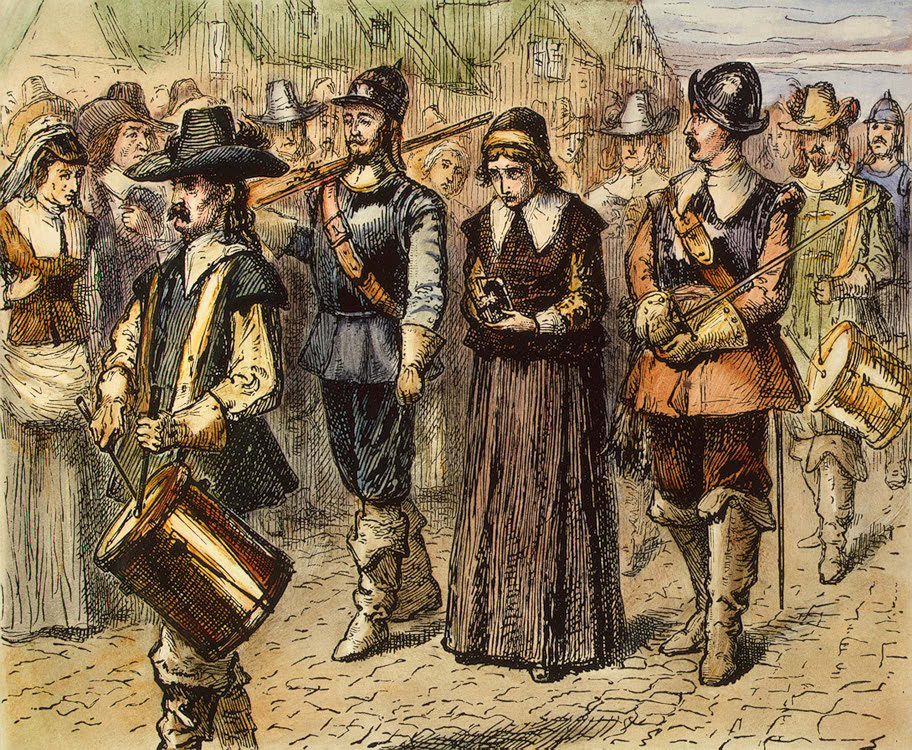 The Write Sisters are heavy into the research part of our second collaborative book. Today, at our monthly meeting, Kathy read a draft of her Tenley Albright chapter, Janet read a little bit of her Mary Dyer draft and the group critiqued my chapter on Ellen Swallow Richards.

This is where the real work begins--not just in the research and writing--but in the give and take that will ultimately become our book. Each of our "25 Women" books tries to cover American history from the 1600s to the present. Today we talked about whether the 1600s were properly represented by having a chapter on Anne Hutchinson and a chapter on Mary Dyer. Were the women's histories too similar? Would it be better to eliminate Anne Hutchinson since many kids' books have already been written about her? Who would make a suitable substitute?

Before we started the book, I had compiled a list of nearly 50 women we could profile. In an earlier blog entry, I talked about the decision-making process that goes into whittling down that list to just 25 names. One thing we learned in our first book was that this process has to remain flexible. When each writer agrees to do certain topics, it is with the full knowledge that we may have to drop one or more topics with something more suitable. Maybe there just isn't enough information on the subject. Maybe the subject chosen for profile is not really a good role model or research topic for children. Later this week, I'll let you know the decision about Anne Hutchinson's fate (that seemed to happen to the poor lady a lot, as you can see in the illustration). I'll also discuss why the decision was reached and how it impacts the book.
Posted by Mur at 10:36 PM No comments: