Women of Wednesday: And Weather 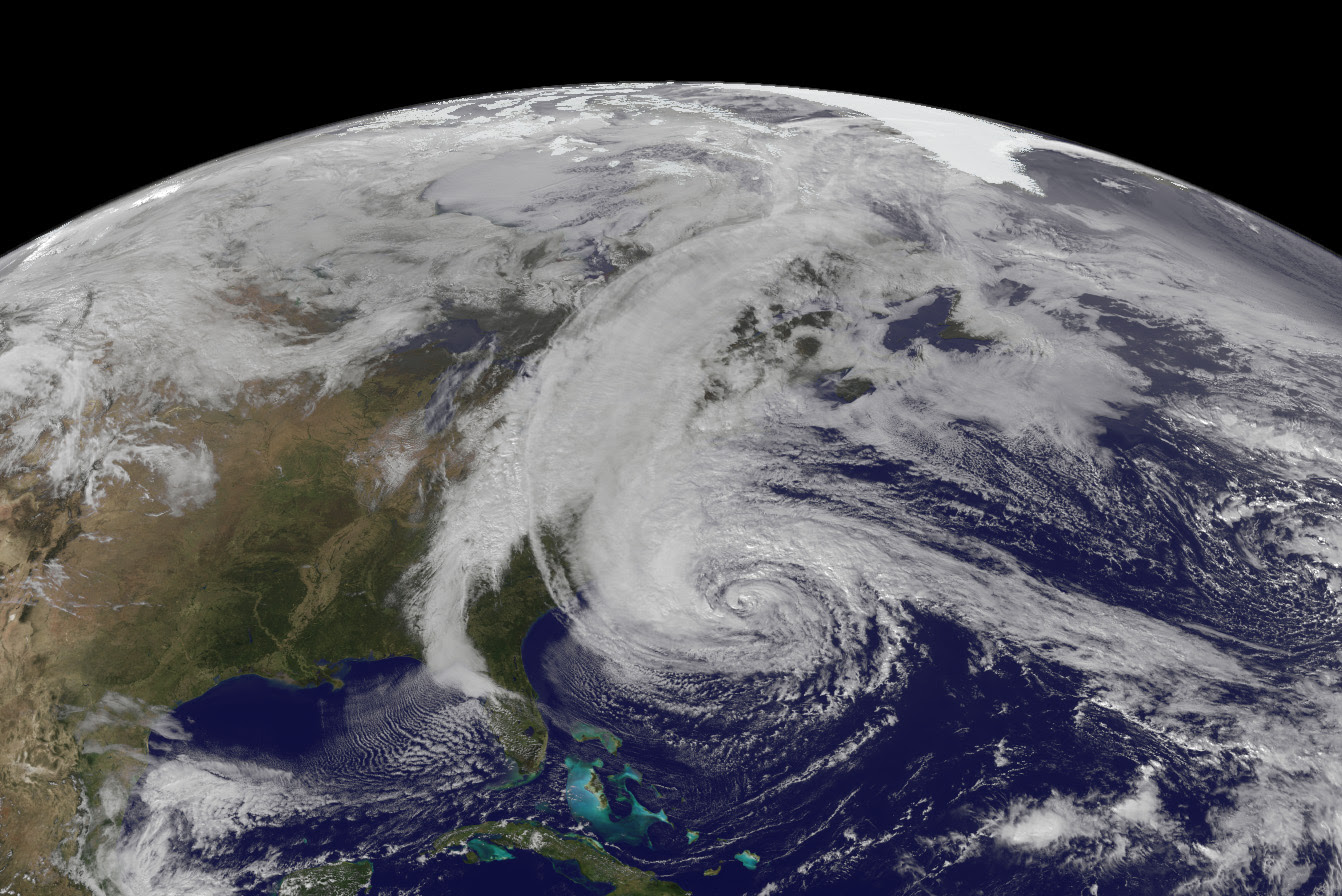 All the coverage of Sandy on the television over the last few days had me thinking about the days when all hurricanes were given female names, and the brouhaha that surrounded the change to that tradition. Sandy, of course, is a nice androgynous name, but it is difficult to believe that as recently as 1979 people would say in public that hurricanes should be given female names because women are more likely to be stormy and unpredictable. . . (for the record, Sandy is on the list as a woman’s name, sandwiched between Rafael and Tony).

The next thought in this train had to do with the number of women covering Sandy – whether standing in the downpour or fighting to remain vertical against the wind or warm and dry in the broadcast studios, women’s faces were on every screen. And I remembered that broadcast meteorology was one of those careers in which women were severely underrepresented – and in fact, that the long tradition of “weather babes” (sometimes slightly less blatantly called “weather bunnies”) had made it even more difficult for women to be taken serious in meteorology than it was in other science careers.

So here’s a short tribute to American women in weather. 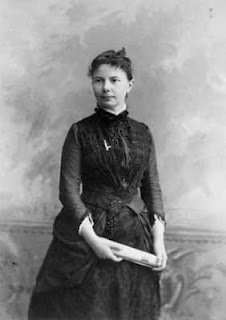 Sarah Frances Whiting was the first professor of physics when Wellesley College opened. Like many scientists of the 19th century, her interests were wide-ranging; like many women of the era, she fought an uphill battle to be allowed to study and to advance in her field. After being invited to join the New England Meteorological Society (the first woman so honored) she established a course in meteorology at the college and built a weather-data collection center there, as the United States Weather Bureau had no observation stations in the area. 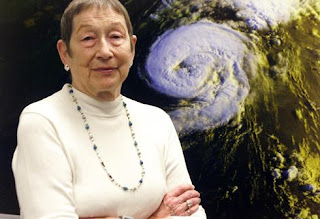 Joanne Malkus Simpson, who died in 2010, was recognized as one of the top meteorologists in the world. Appropriately enough for this post, she was an expert in tropical storms, one of the two scientists who in the 1950s explained how and why hurricanes form in the tropics and move across the oceans the way they do. Simpson had developed this knowledge as a part of her pioneering work in cloud studies, a field so untouched that a professor at the University of Chicago approved of her work, saying it would be a good area “for a little girl to study.’’

Bernice Ackerman got her start as a weather observer with the WAVES in WWII, and after the war went on to earn advanced degrees in meteorology. Like Simpson, she studied clouds and wind, and became an expert on tornados and on manipulating clouds to cause rain.

June Bacon-Bercey became the first woman broadcast meteorologist in the United States in Buffalo, NY in 1970, breaking two barriers at once, as she was also the first African-American in that role. Although she got the job for being in the right place at the right time (she was a science correspondent for NBC in Buffalo when the chief meteorologist at the station was arrested and fired), she proved more than adequate to the job.

There are in fact several dozen well-respected women among the annals of meteorological science, but the broadcasting world has been slow to recognize them. In television, especially, the accepted wisdom was that the serious scientist in the weather department was a man, and the role of a woman was to be eye candy. As in so many scientific fields, the images of women promoted by the broadcasting industry have had significant impacts on the entry of women into the field. To some degree this is still true, particularly in markets outside the US and UK, but things are finally changing in the United States. As recently as 2008 studies still showed a dramatic lack of women at the top of the weather departments in local and national news organizations, but in the last two or three years a number of large markets have shifted, with several or even all the local newsrooms having women as their senior meteorologists.

My non-scientific observation of the broadcasting around Sandy was that the male-female ratios were pretty evenly divided. As changing climate and weather become ever more important in our lives, it’s good to see that we are not relegating women to the role of visual aid any more.
Posted by Sally at 12:10 PM 1 comment:


I’ve been thinking about and comparing Project Management tools recently. Project Management tools are systems (not only software but whiteboards and other tangible tools) that help you keep track of all the bits and pieces of a project. Good ones enable you to break down a project into component parts and subparts, assign due dates to the overall project and the parts, and estimate the time each will take. This in turn should help you to not over-commit yourself, not lose track of one or another of your projects, and in general turn things in on time and feel (and be) more successful.

Most project management systems are developed for and used by companies with multiple users, often many, many people in different departments and different locations. Although there are certainly situations in which a freelance writer might need to involve more than one user in a project (co-writers, for example, or various assistants from typists to translators), the focus of corporate-oriented project management systems on collaboration can make them over-heavy with bells and whistles that just get in the way for the writer.

What do I (and perhaps you) need from a Project Management system?

The ability to see if not integrate a variety of projects at the same time. Most of us are not just freelance writers. We have day jobs – sometimes more than one. We have family responsibilities (and frequently need to coordinate calendars with other members of the family). We volunteer with non-profits or political campaigns. And our freelance work generally involves multiple projects at varying stages of completion: You may be simultaneously doing revisions for a soon-to-be-published piece, drafting for an assignment, research for a proposal and market research for an idea.
How to keep track? A calendar can help you avoid scheduling a phone interview on the day of the soccer banquet you promised to coordinate, but it’s not very good for remembering to check for a response from your editor to the question you emailed last week. A tickler file might help with poking the editor but isn’t good for making sure you set time aside for those revisions. All too often the actual writing of new material gets compressed into crisis mode because so many other items, more urgent but less important, impinged on what should have been writing time.

Having multiple systems creates its own problems. The more places I record information, the more likely it is that I will forget to check them all. I tend to not use tools that take time to access (logging in or booting up) consistently. (And let’s not even talk about the number of times I finally get the software opened and realize I’ve forgotten what I wanted to note!) Hard copy and desk-based tools can be inaccessible when you need them, portable ones (which range from scraps of paper in my pocket to my whiz-bang tablet) can be left behind or even lost. I really do need something that will remind me of things that don’t happen every day or week (like writing blog entries, or going to the dentist). I’m intrigued by products that keep track of the time spent on various tasks – both because some of my work is in billable hours, and because I think it might help me be more accountable to myself for those projects that no one is watching or waiting for (like my novel revision).

Years ago the Palm desktop software had a pretty good integration of the calendar and task functions that served most of my needs, but the Palm Pilot has gone the way of the dinosaur. Outlook’s tasks and calendar don’t seem to work and play well together (not surprisingly, since Microsoft wants us to buy Microsoft Project). I’ve tried big paper calendars and bulletin boards but they tend to get very messy very fast, and they have that “tied to the office” problem. I’m currently using Wunderlist for keeping track of my one-off tasks, from phone calls to errands, a hardcopy planner for the calendar-based items, and a trusty paper to do list for capturing things as they cross my brain (or get dumped on my by bosses, coworkers and family). I can access it at the desk or online, print out or email lists to myself, assign due dates to things and call up a list of overdo items. But it’s definitely not meant for project management. I’ve checked out and rejected a couple of project management products that were either too barebones or too ad-laden to be useful (I’m not paying for anything that won’t let me test it first!)

I’m testing Todolist from Activespoon right now, but would love to hear what other writers are finding useful. What systems have you used and abandoned, and what works for you?
Posted by Sally at 11:50 AM 1 comment: