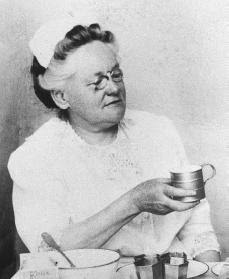 Growing up I thought that Fannie Farmer was a made-up name, like Betty Crocker or Aunt Jemima. But in fact, Fannie Merritt Farmer was a very real, very remarkable woman, one to whom almost every one of us owes a considerable debt.

Fannie was born in Boston in 1857. Her family moved to Medford, a pleasant suburb, when she was a child. Fannie’s parents believed that their four daughters (Fannie was the eldest) should have a good education, and she graduated from high school with plans to attend college. Shortly after graduation, however, she suffered a stroke which left her an invalid in her parents’ home, paralyzed on one side.

With several years of hard work and determination Fannie gradually regained the use of her limbs, although she always had a limp. In her twenties she found work as a domestic servant with a family named Shaw. There she discovered she had both an interest in and a knack for cooking. At thirty-one, Fannie finally embarked on furthering her education, enrolling at the Boston Cooking School.

Fannie distinguished herself at school and when she graduated in 1889 she was invited to become the assistant director. She took the job, while also pursuing further education, taking classes at Harvard Medical School. She was interested in exploring the connections between diet and health. 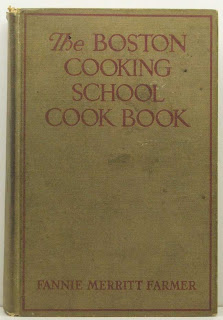 Just two years after Fannie graduated from the Boston Cooking School, the director died and Fannie was appointed to replace her. She held the position for eleven years. It was while she was running the Boston Cooking School that she wrote the cookbook that made her famous: her update of The Boston Cooking School Cookbook went to 21 editions before Fannie’s death in 1915, and is still in print today. Among the innovations Fannie introduced at the Boston Cooking School and in her cookbook was the idea of standardized measures: instead of saying “a lump of butter the size of a hen’s egg” a recipe would say “three tablespoons of butter” – and the cook’s tablespoon would be the same size, whether it was in the kitchen of a grand hotel in Florida or a hospital in Boston. Standard measure makes it possible to reproduce a recipe without actually watching someone else make it. This is so obvious to us today that it’s hard to believe it has not always been so, but you don’t have to go back very far to find those “hen’s egg” recipes. (One of my aunts, being of a scientific bent of mind, followed my grandmother around the kitchen , measuring the amount of flour/sugar/milk in the container before and after my grandmother added it to the recipe, in order to determine how much of each she was using. . . .)

In 1901 Fannie resigned from the Boston Cooking School and opened a school aimed not at those who would become professional cooks but at housewives interested in improving their cooking skills for their families. The notion of “domestic science,” which had been promoted in the 19th century by such notable women as Catherine Beecher and Ellen Swallow Richards had been taught mostly by land grant colleges in rural areas. Miss Farmer’s School of Cookery brought the idea to women in an urban area, many of them second and third generation immigrants moving into the middle class. The school offered weekly lectures to non-students, and Fannie wrote a column for Woman’s Home Companion, spreading her ideas of creative and healthful cooking to a wide audience.

Fannie’s determination showed through when she suffered another paralytic stroke later in life: she continued to teach and lecture from her wheelchair; the last one just 10 days before her death. In this day of countless cookbooks, food magazines, TV channels and websites dedicated to food preparation, it’s hard to believe that there was a time, not long ago, where family cooks either cooked exactly the foods their mothers had made, or ventured into the vast unknown without a map. Fannie Farmer, with our measuring cups held high, we salute you!
Posted by Sally at 8:37 AM