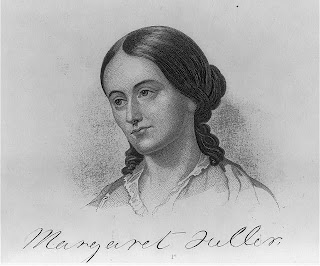 Margaret Fuller was born in Massachusetts in 1810. Her father, a lawyer, taught her at home, since only men could attend college at that time. As an adult, she became a teacher and was compelled to further educate the public. Fuller wanted to lecture, but women weren't allowed to lecture, so, instead, Fuller held "Conversations." She was considered an excellent conversationalist!

Fuller was an editor, a writer, an investigative reporter (for Horace Greeley's New York Tribune). She was a member of the Transcendentalists and was a beloved friend of both Emerson and Thoreau.

Margaret Fuller lived an incredibly full life which ended a few months after her 40th birthday. She, her husband, Giovanni Ossoli, and her baby boy were drowned in a sailing ship accident off the coast of Long Island, NY. Her body was never recovered, but a monument was erected in her memory in Mt. Auburn Cemetery in Watertown, MA. Its brass plaque sums up her life,

In youth
An insatiate student seeking the highest culture
In riper years
Teacher, writer, critic of literature and art
In maturer age
Companion and helper of many
Earnest reformer in America and Europe

Margaret Fuller is not a name familiar to many, but, if you do an online search, you'll find numerous sources containing information on this remarkable woman, one of America's first feminists. If you visit the Project Gutenberg site, you can read two volumes of her memoirs as well as other of her writings. Here's a small sample from Women in the Nineteenth Century Woman and Kindred Papers Relating to the Sphere, Condition and Duties, of Woman:

Man is as generous towards her as he knows how to be.

Wherever she has herself arisen in national or private history, and nobly shone forth in any form of excellence, men have received her, not only willingly, but with triumph. Their encomiums, indeed, are always, in some sense, mortifying; they show too much surprise. "Can this be you?" he cries to the transfigured Cinderella; "well, I should never have thought it, but I am very glad. We will tell every one that you have 'surpassed your sex.'"

There's no doubting her tone! You go, girl!

I love what's written on her monument.

Thanks for sharing the Gutenburg Project link, too. Can't wait to check it out.

"Man is as generous towards her as he knows how to be." I'd have loved sitting in on one of her "Conversations."