If you've never heard of The Writers Almanac with Garrison Keillor, you're missing a great daily dose of food for the intellect and soul -- to both writers and readers. If you can't listen to it during its daily broadcast on your local National Public Radio station, sign up here to get it in your inbox.

The offering for Wednesday, October 7 includes this poem by Katha Pollitt. She's also a regular contributor to The Nation with her column titled Subject to Debate, an offering The Washington Post called "the best place to go for original thinking on the left."

Everywhere I look I see my fate.
In the subway. In a stone.
On the curb where people wait for the bus in the rain.
In a cloud. In a glass of wine.

When I go for a walk in the park it's a sycamore leaf.
At the office, a dull pencil.
In the window of Woolworth's my fate looks back at me
through the shrewd eyes of a dusty parakeet.

You can read the rest of Amor Fati at The Writers Almanac for Wednesday, October 7.
This is Katha Pollitt: 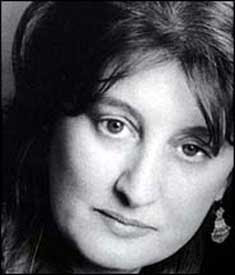 You can almost hear Garrison Keillor's smooth, distinctive voice as he offers up this little nugget about Charlotte Bronte in another October 7 entry.

It was on this day in 1847 that Charlotte Brontë's Jane Eyre was published (some sources say October 16). The public reception was divided. William Thackeray, who wrote Vanity Fair, called it "the masterwork of a great genius." One reviewer said, "This is not merely a work of great promise; it is one of absolute performance. It is one of the most powerful domestic romances which have been published for many years."

But not everyone liked the novel. A lot of reviews were focused on trying to figure out who had written Jane Eyre, and especially whether the author was a man or a woman. Charlotte Brontë had published the book under the androgynous pseudonym Currer Bell, the same one she had used a year earlier when she published poems by her and her sisters, Emily and Anne. She changed Charlotte to Currer Bell, Emily to Ellis Bell, and Anne to Acton Bell.

Charlotte decided to publish the poems after she accidentally found some poems that Emily had written, and the three sisters realized that they had all been writing poems secretly for years. When she published Poems by Currer, Ellis, and Acton Bell in 1846, only two copies sold. But she submitted Jane Eyre for publication the next year. It was rejected five times, and then she sent it to Smith, Elder, and Co., her eventual publishers. She sent it with a note that said:
It is better in future to address Mr. Currer Bell, under cover to Miss Brontë, Haworth, Bradford, Yorkshire, as there is a risk of letters otherwise directed not reaching me at present. 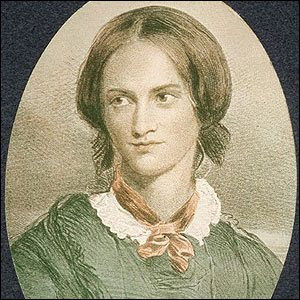 Thanks for sharing this. I'd never heard of the Writer's Almanac. One more thing to fit in my day!