It’s been bitterly cold the last two days, here in New Hampshire. And whenever it gets that cold, I find myself pulling out Robert W. Service and The Cremation of Sam McGee. Just reading it warms me up!
First, a little bit about Mr. Service, who spent a great deal of his life up in the Yukon during the Alaskan Gold Rush.

From his obituary in the, Pittsburgh Sun-Telegraph, September 16, 1958.
He was not a poet's poet. Fancy-Dan dilettantes will dispute the description "great." He was a people's poet. To the people he was great. They understood him, and knew that any verse carrying the by-line of Robert W. Service would be a lilting thing, clear, clean and power-packed, beating out a story with a dramatic intensity that made the nerves tingle. And he was no poor, garret-type poet, either. His stuff made money hand over fist. One piece alone, The Shooting of Dan McGrew, rolled up half a million dollars for him. He lived it up well and also gave a great deal to help others.
Imagine that. A poet making half a million dollars. On one poem!
Personally, I like Sam McGee better than Dan McGrew. 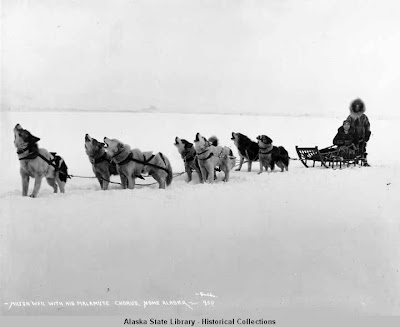 Photo: Beverly Bennett Dobbs
Today's Poetry Roundup is being held at Susan Writes
Posted by Barbara at 12:00 AM

Wow, Barb! I'm with Sam McGee on this one. Stuff me in any ol' fireplace or patio fire pit. Yesterday was terrrrrrible cold. I pitied the birds, the animals, and all the folks who have to work outside.

As far as I know, Bedford eighth graders still study this poem--and love it! I remember my kids talking about it. (Imagine--pre-teens actually mentioning a class lesson!)