Women of Wednesday--Women on the Mayflower 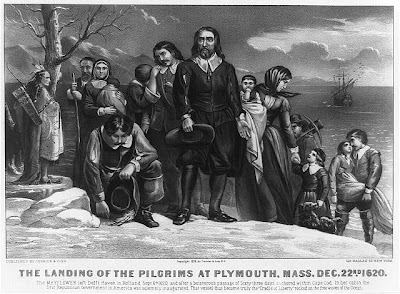 Currier and Ives print from the Library of Congress collection
In July 1620, just over 100 men, women, and children boarded the Speedwell, a ship which soon proved unseaworthy. On September 6, after abandoning the Speedwell for the Mayflower, they headed off to the land that was later to become the United States of America.

Of those passengers, 30 were female. They were (all ages are approximate):


The Pilgrims spotted land two months later on November 9. Most people probably think that once land was spotted everyone disembarked and started building Plymouth Plantation. Not so. It wasn't until late December that the men decided to take over an abandoned Wampanoag village. The Mayflower spent four months in Plymouth harbor, finally leaving for England in April 1621. While the men did a bit of exploring, clearing and building, the women were confined to the Mayflower--the cold, dank, stinking, 'tween deck. In December, Dorothy Bradford, accidentally fell off the Mayflower and drowned in the harbor.

Imagine maintaining a "home" on the Mayflower. Keeping the family fed, dressed, spiritually sound, and healthy. Some women even cared for the children of others--several children traveled as wards of other families.

When Sarah Eaton boarded the Mayflower, she was still nursing her infant son, Samuel. At least three women were pregnant on the voyage. Elizabeth Hopkins gave birth enroute, to a son who was named Oceanus. Mary Allerton, also gave birth to a son, in December. The child was stillborn.

Life probably seemed unbearable for most, if not all, the women on board. After her baby's stillbirth, Mary didn't survive long.

Neither did most of the women. Look at the list above. All those in purple died during the first winter. When the first Thanksgiving was celebrated in September or October 1621, only four adult women remained.

Wow. I did not realize how few women survived that first winter. Thanks for the reminder, Diane.

Fabulous post, Diane! How can it be that nearly 300 years later these remain such little known facts? Thanks for giving me a bit more information about my g.g.g.g.g.grandmother (not sure how many g.g.s she is) Mary Chilton. (I can't resist bragging on GramGram, as my sister Stephie calls her.)

Here's a Notable Woman connection to the Mayflower for you: Rebecca Towne Nurse (my auntie who was falsely accused and executed for witchcraft) is also Mary Chilton's g.g.g.granddaughter.

In all seriousness, thanks for this unvarnished look into the past.

More proof that I was born in the right century. There is no way I could have lived as those women did. Thanks for posting this information, Diane.

Interesting--the men must have had it cushy in comparison. They had a much better survival rate.
Linda

What a fantastic feature. I remember reading that one of the women left a very tiny son behind in Holland. She hoped he might survive. What an agony. I wonder what happened to that little boy. Or little Humility Cooper, for that matter.

Humility lived to return to England. She died at about 32. There's some information at the Pilgrim Hall Museum site.