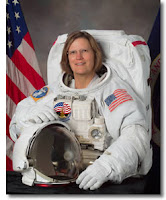 Measured against a life-time, three hours and 29 minutes is nothing.  In some cases, however, it can be everything.

Kathryn D. Sullivan was born in 1951 in New Jersey but grew up in Woodland Hills, California.  She was the daughter of Donald and Barbara Sullivan. She graduated from William Howard Taft High School, the University of California in Santa Cruz, and received her PhD in geology from Dalhousie University in Halifax, Nova Scotia.

Kathryn became part of NASA Astronaut Group 8 in 1978.  The group was significant for including the first six women, three male African Americans, and one male Asian American astronauts. She became the first woman to walk in space on October 11, 1984.

Later she said,  “You get a grand, spectacular, profoundly inspirational view of earth from orbit…”

Kathryn entered the U.S. Naval Reserve in 1988 and achieved retired as a Navy captain after 18 years of service.

On May 2, 2011, Dr. Sullivan was appointed by President Obama as assistant secretary of commerce for environmental observation and prediction and deputy administrator for the National Oceanic and Atmospheric Administration (NOAA).
Posted by Mur at 6:00 AM