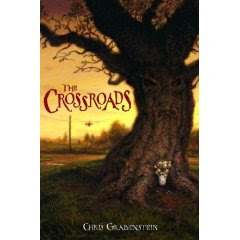 The Crossroads
By Chris Grabenstein
Random House 2008
Middle Grade Ghost Story
I picked up The Crossroads, by Chris Grabenstein, because of the title. Years ago, criminals were often buried at a crossroads in the belief that their ghosts wouldn't be able to find their way back to town, so the title indicated it might be a paranormal story. I picked it up and read the back cover. It read:
Have you ever seen a face hidden in the bark of a tree and known the man trapped inside wanted to hurt you?
Oooh. Cool, I thought. I flipped to the front jacket blurb. It read:
Meet Zach Jennings.
Awesome kid.
He has a hardworking father.
A new stepmother.
A new house.
Even a new dog, Zipper.
Things are looking up for Jack.
Except that there is this ghost.
This really nasty ghost.
A ghost who kills people.
And Zach is on his list.

Now how can you not pick this book up? I bought it, ($16.99) took it home, and started to read.
The Crossroads is about eleven year old Zach Jennings who moves to his Dad's old home town, right on the intersection of County Road 13 and State Highway 31. Neither he, his dad, or his new stepmom knows a terrible car accident happened there fifty years ago where a busload of people, a police officer, and the driver of another car were all killed. Nor do they know the ghosts of all those people still wander about town, and the ghost of the man who caused the accident - a particularly nasty man - just happens to be trapped inside the tree in their back yard. During a storm, lightning hits the tree and the ghost escapes, intent on getting revenge on all the people who ruined his life while he was alive.
The novel is written very much like a Stephen King novel - a lot of short chapters involving a lot of people who all come together in one way or another for the story's climax. The opening was slow and hard to get through, and the writing was passive more often than not. I was never sucked into the book. But once the ghost arrived on the scene (page 80) things started to pick up.
Eleven year old Zach Jennings is supposed to be the main character. He's hardly in the story, and when he is, he's practically a secondary character. He doesn't make decisions on his own, he just follows along blindly with whoever else is in his chapter. He doesn't realize anything bad is happening, or that there even is a ghost, let alone a ghost who wants to kill him, until almost the very end. And though the ghost does want to kill him, it's not his main objective. He passes up a chance to kill Zack for the possibility of having a burger, fries and chocolate shake. Killing Zach doesn't become important to him until almost the end of the book.

The real hero of the story is Jack's stepmother, a children's book author. She's the one who discovers the mystery. She's the one who digs up all the clues. Well, she doesn't really dig them up. The local librarian hands her everything she needs to know, then she puts the pieces together. And she gets rid of the ghost. Zach does have a hand in it, but he's just doing what he's told.

Chris Grabenstein normally writes for adults and that may explain why the book is about adults and why the problems are solved by adults. Zach is the one who destroys the tree, but he has no idea why he's doing it, again, not until almost the end. Until then, he's just doing what his friend asks him to do.

And there were a lot of incidents where things just "coincidentally" happened. We never see Zach play a video game, but when he suddenly uses a wrestling move on the ghost, it's one he learned from playing video games. And when his step mom finds a key to a safe deposit box, the librarian's husband just happens to be the man in charge of them at the bank.

And yet, while I did feel like the book fell way short of the promise of the jacket flap, it did keep me interested. Not riveted, but interested. I just wonder if it will keep a kid interested. I'd say pick it up at the library or wait for the paperback.
Posted by Barbara at 2:12 PM

Not sure I'd waste my time on this one!