Three of the Write Sisters managed to connect with another WOG subject. Yesterday, Muriel, my "civilian" pals Lynne Barret and Kathy Winn, and I headed into Portsmouth to hear Doris "Granny D." Haddock speak at the South Church. We hooked up with Diane on State Street at Re-Enhabit, my cousin Jodie Curtis's store. Jodie is a sales genius and shared tons of great tips for getting Women of Granite: 25 New Hampshire Women You Should Know (WOG) and the other books in Mur’s Apprentice Shop Books' catalog into stores. She pointed out that these are exactly the kinds of books (well-written, interesting subjects, relevant to the area) that do extremely well in touristy towns such as Portsmouth. We talked with her for about an hour (actually Jodie gave us a crash course in the fine art of sales), and then went to Popovers in Market Square for an outdoor dinner.

Dinner on the sidewalk in Portsmout 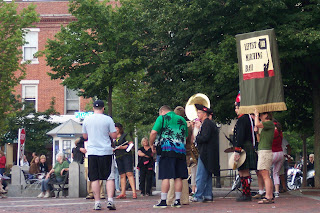 h is a people-watching extravaganza. The Leftist Marching Band just happened to be playing at a peace rally on the corner right next to Popovers. The band was a colorful mix of old and young hippies attired appropriately and adorned with some of the best body art this side of Seattle. We arrived just in time for the don’t-shop-at Walmart sing-along. Regardless of your feelings about Walmart or your political leanings, they were fantastic. Democracy in action is a beautiful thing. Dinner was mighty tasty, too.

After the band finished, who should appear from the dispersing crowd but Doris “Granny D.” Haddock! She wore her trademark feathered hat, and the only concession to her 98 years was a pair of escorts, one on either side. Lynne snapped a couple of great pictures, and we told Granny we were looking forward to her speech that evening.

We spent the rest of our time in Market Square talking about the literary world's designated next big thing, Brunonia Barry's first novel The Lace Reader (William Morrow, 2008). This originally self-published book ended up going for better than 2 million dollars at auction. At that price, it better be the literary world’s next big thing. Anyway, both Lynne and Kathy live in Salem, Massachusetts, where The Lace Reader is set. They said that the buzz surrounding this book is phenomenal. Salem, a huge tourist town, has even added a Lace Reader Tour to the tourist trolley schedule.

After dinner we headed to the South Church, passing Granny D. and her escorts on our way. (Not much of a feat, really. The woman is 98-years old, after all.) Granny D.'s speech was absolutely inspiring! There aren’t many folks left who remember first-hand women winning the right to vote. She was 10-years old at the time, and recounted how excited and proud her mother was at the prospect of casting her first vote. She made the crowd laugh when she told how her mother turned to her father and asked, “Who should I vote for?” She was quick to point out that was the one and only election for which she sought his advice.

Granny D. remembered trying to bring her father into the Democratic Party. He was a Lincoln Republican (as in personally remembers Lincoln!) and a hard sell. Can you imagine in the year 2008 being able to say that your father was a contemporary of Abraham Lincoln? It’s stunning, really. 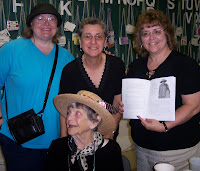 We presented Doris with a copy of WOG, and ended up creating a little WOG buzz within the crowd. We are finding that once people learn about WOG, they always want to hear more.

Oh, and guess who else was spotted on State Street yesterday. Jeanne Shaheen, another of our WOG subjects! Diane saw the Governor and her husband strolling past Re-Enhabit shortly before Mur and I arrived.

It was a veritable WOG festival in Portsmouth yesterday!