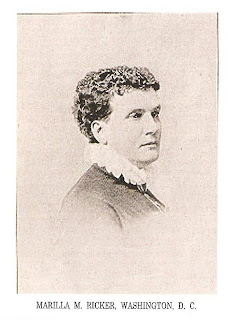 Of all the women I’ve profiled, Marilla Ricker is my favorite. She was a woman who knew what she wanted and went after it. Even as a child, she was a force to be reckoned with. She was born in 1840 in New Durham, NH, the second of four children. Her mother was a Baptist, her father a Freethinker. Marilla refused to go to church or say her prayers. “I will not kneel and pray, Hannah,” she told her mother, who she called by her first name.

At sixteen, Marilla was teaching school and was required to read to the students from the Bible every day. Marilla refused. When told it would mean losing her position, she went to school and told her students, “We will now read the startling and truthful account of Jonah whilst a sojourner in the sub-marine hotel.”

Marilla married John Ricker when she was twenty-three. He was fifty-six. He died five years later, leaving her an independently wealthy woman. The next year, Marilla attended the first meeting of the National Women’s Suffragette Association. When she returned, she tried to vote, but was turned away. Marilla protested. “ . . . so long as women are hanged under the laws, they should have a voice in making them,” she said. She also believed there was no point in asking men--her oppressors--for equal rights. Women had to do the work themselves. She said, “I have found that men will listen to all your arguments readily and then will go home and forget everything you have said.”

Marilla traveled to Europe to study with Freethinkers for a few years then returned to the US to study law in Washington, DC. She passed the bar and began working on cases that helped convicts and the poor. It’s said she never charged anyone for her work. When she returned to NH, the state would not allow a woman to practice law. She sued the state and won her case, giving women of NH the right to practice law.

From there, Marilla got involved in politics, and worked hard for the Republican Party. When McKinley became president, she applied to become Ambassador to Colombia, a position that normally went to a NH resident. Although she had supporters, she was still turned down. She was, after all, a woman. Still, it didn’t stop her. In 1910, at age 70, she announced her candidacy for Governor of NH.

“I’m running for Governor in order to get people in the habit of thinking as women as Governors . . . . People have to think about a thing for several centuries before they can get acclimated to the idea. I want to start the ball rolling.”

But Marilla wasn’t allowed to run. Only voters could run for office and Marilla could not vote. Still, she did get the ball rolling. In 1996, Jean Shaheen became the first female Governor of NH. It didn’t take centuries.

In August of 1920, when Marilla was 80 years old, the 19th amendment was passed giving women the right to vote. Marilla died three months later. No one knows if she ever cast a ballot, but I like to think she did.
Posted by Barbara at 9:48 AM

Readers of your books and blog will be pleased to know that fundraising is moving forward for a portrait of Marilla Marks Ricker to hang in the NH State House. Information about the portrait project can be found on the Marilla Ricker page of the League of Women Voters NH website: http://lwvnh.org/Marilla_Ricker.html

On Monday, May 16, 2016, Marilla Ricker will take her rightful permanent place in the New Hampshire State House.

Happy to see it happen at last! --Diane