Several months ago, I wrote a Mentor Monday entry recommending that you read as much as you can within your genre. For me, that's picture books. I've read literally thousands of them during my almost 30 years of teaching preschool. Part of knowing your genre, is knowing your readers. What do they think makes for a good read? How do they process information? What do they find funny? How do they articulate their thoughts?

To that end, I'm having book discussions with my students at least once a week. My students range in age from 3 years 0 months to 5 years 2 months, and I mix the ages in my classes. I'm blogging at The Picture Book Project, and thought all of you children's writers might find it interesting to read beyond the professional reviews and find out what children really think about the books we write for them. (The numbers before each child's name indicates the child's age in years and months.) Enjoy! 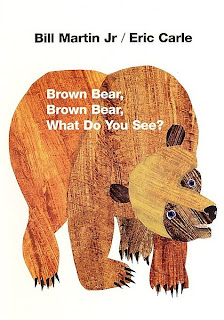 The first three books we're reading at Hogarth this year are Brown Bear, Brown Bear, What Do You See? and Polar Bear, Polar Bear, What Do You Hear? written by Bill Martin, Jr. and illustrated by Eric Carle, and The Very Hungry Caterpillar written and illustrated by Eric Carle. In our class discussions following the readings, we looked at Carle's illustrations and noted that the endpapers of the Bear books were illustrated with stripe patterns, and the endpapers of the Caterpillar book was illustrated with a dot pattern. References to stripes or dots within the children's comments relate back to that discussion.

In order to get the book discussion ball rolling, I asked each child to pick his or her favorite from among these books and talk about what made that book so appealing. If this didn't prompt a big response, I followed up with questions specific to their favorite book. If they picked either Bear book, I asked which animal depicted in the book was their favorite. If they picked the Caterpillar book, I asked which food they'd eat first if they were a hungry caterpillar. 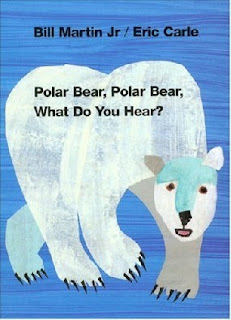 4.8 Keegan: My favorite was Polar Bear. I liked the front cover. My favorite animal was the peacock because of his spots, and I never seen a peacock.

5.2 John: I liked them all because I liked when the zoo keeper came to feed the walrus in Polar Bear and because all of the kids were dressing up like animals. I like Brown Bear because the class was looking at the teacher and the teacher was looking at the fish and looking at the kids. I like The Very Hungry Caterpillar because of Monday, Tuesday and all of that stuff when they flipped over and there kept being more and more food. The Caterpillar one is my very favorite. I liked the way Eric Carle did the end papers. One had dots and one had stripes facing up and one had stripes going sideways.

4.10 Daniel: I liked the Caterpillar one best because it had the folds in the paper. I liked it when the caterpillar was a baby and I liked the part where it was a butterfly. It was really pretty.

4.3 Brady K.: I liked Brown Bear best because I liked the stripes on the end. My favorite animal was the purple cat because he's purple!

4.5 Sophie: I liked Brown Bear best because the teacher was reading the book about animals to the kids. My favorite animal was the purple cat because of the purple. I like purple.

(Note: Neither Brady nor Sophie heard the other one's purple cat preference. Mack in PK also referred to the purple cat. Obviously, this is a very appealing illustration.)

4.2 Kaitlyn: I liked the Caterpillar because it was super hungry and he ate too much and he had a stomach ache. If I was a hungry caterpillar I'd eat the apple first.

3.6 Eva: I liked the Caterpillar best because it ate a leaf up and then had a tummy ache, that's why. I liked the part where the caterpillar ate up all the food. If I was a hungry caterpillar I'd eat a leaf first.

3.8 Mack: I liked Brown Bear best because it had the kitten. It was purple. I liked that one. And she was licking her elbow. Meow! Meow! Meow! I can do the sound of her. That made me laugh.

3.7 Emelyn: I liked the Caterpillar because it was silly when you said the moon was an egg! 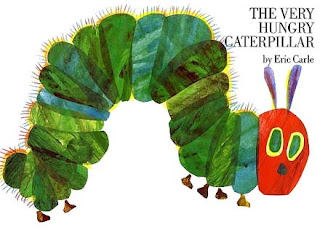 3.11 Acadia: I liked the Caterpillar because I got it at home and it's my favorite book. I like the colors of the circles. If I was a hungry caterpillar I'd eat the pickle.

We continued exploring Eric Carle's books today when we read The Grouchy Ladybug. Once again, I asked the children to pick their favorite Eric Carle book from among those we've read thus far. 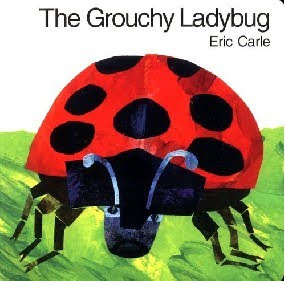 4.5 Leah: I loved The Very Hungry Caterpillar so much! I liked the food part best. I loved that. That was so silly. If I was a hungry caterpillar I would just eat three plums so I wouldn't get a tummy ache.

4.9 Brooke N.: I liked The Grouchy Ladybug because there were a lot of people who were big, but she said they were not big enough, but they were big enough. I liked the rhinoceros part because he was trying to eat him but he was too big.

4.2 Bella: I liked The Grouchy Ladybug because of the pictures with the little pages and the big pages. I liked all the clocks because the hungry ladybug did all of that. [Points at clocks.] I liked the elephant best because I saw one at the zoo.

4.0 Arthur: I liked all of these books. My favorite was The Grouchy Ladybug because he keeps saying, "You're not big enough!" I liked that it did it like this. [Indicates the differently sized pages.] My favorite animal was the whale because it slapped the tail on the ladybug and the ladybug said, "Ah-h-h-h-h!" And then he put his tail back and that was my favorite part.

4.11 Brooke B.: I liked The Grouchy Ladybug because when he said, "No, you're not too big!" I liked the hyena best because it reminds me of Izzy. She really likes hyenas and she's my best friend.

4.2 Kaitlyn: I liked the Ladybug book and the Caterpillar book. [The rest of Kaitlyn's commentary relates to the Ladybug book.] I liked the nice one and the grouchy one, because the grouchy one said, "Hey! You want to fight?" The nice one said, "Why don't we share?" And they didn't share. I liked that one [sparrow] because he thinked the bird was too big, but it was too small, but it was really big. That one [elephant] was definitely big. He talked to that one [whale's fin] but it wouldn't talk. I liked that it ended up back where he started.

4.0 Arthur: [Popping into the conversation.] Why did they put the clocks on the ladybug book?

Miss Murphy: Eric Carle used the clocks to take us through the whole day with the ladybug. The clocks let us see what time the ladybug met up with each animal. 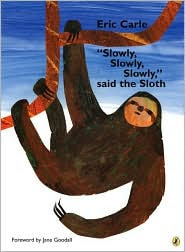 4.8 Ryan:  I liked the Caterpillar best. I liked it because he ate so much food and he was green and that was my favorite color. Mom would like the red and she would say, "Ryan! I have that book!" And that's why I like it.

3.9 Brady D.: I liked the Sloth because him was keep staying right there and because the animals kept coming back and forth. I liked this one best. [Points to Yellow-Spotted River Turtle on the back end papers.] 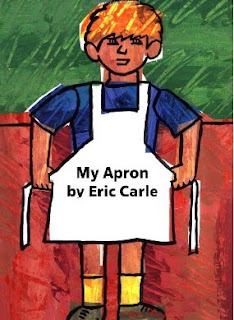 3.10 Aiden R.:  I like the Caterpillar because it itches. Polar bears would like that story. If I was a hungry caterpillar I'd eat the watermelon and the cupcake and the candy and the lollipop and the pickle and the cheese and the cake.

4.3 Teagan:  I like Brown Bear best because I saw a bird and a bunny and a dog in there. My favorite animal was the purple cat.

This is just a small excerpt. If you're interested in continuing to research your reader, head over to The Picture Book Project.

Posted by Andrea Murphy at 8:22 PM

And if I ever write another picture book, it will definitely have a purple cat in it!

Great post, Andy! It's nice to hear from the audience a book was intended for.

"She had little antlers sticking out" I love that. Fabulous idea, A!

Must reading for all picture book writers!

I love blogging with my students. They really know how to turn a phrase.

Glad you liked it, Sistahs!