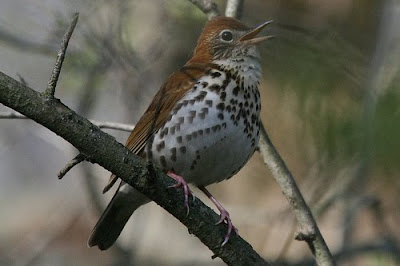 The Write Sisters turn again and again to Robert Frost. Is it something about being a kindred New England spirit? Or is it simply because Frost lived so long and published so many poems that we have so much to choose from?

I have another reason. I live less than 10 minutes away from Robert Frost farm in Derry. I can see what Robert Frost saw, and perhaps feel the same emotions, as I walk the paths in back of the barn. That little bit of connection brings me back to Frost.

Here's a rather bittersweet little poem of his:

As I came to the edge of the woods,
Thrush music--hark!
Now if it was dusk outside,
Inside it was dark.

Too dark in the woods for a bird
By sleight of wing
To better its perch for the night,
Though it still could sing.

The last of the light of the sun
That had died in the west
Still lived for one song more
In a thrush's breast.

Far in the pillared dark
Thrush music went--
Almost like a call to come in
To the dark and lament.

But no, I was out for stars:
I would not come in.
I meant not even if asked,
And I hadn't been.

Readers can take whatever meaning they want from this poem. The struggle between the darkness and the light in human nature. Impending death, either natural or by one's own hand. I prefer to see it as a celebration of the inner spirit of both the bird, who sings despite not quite as safe as he could be upon roosting, and the man, who prefers to gaze at the stars rather than be safe indoors. Have a great weekend and go outside to look at the stars!

This week's Poetry Friday Round-Up is found at Carol's Corner.

Photo by Birdfreak.com
Posted by Diane at 12:02 AM

Beautiful, beautiful, beautiful! I feel the same way about Frost. I think part of it is he was the first "real" poet I remember from my childhood. Who could forget that little gray head, bare in the January sunshine, reading to a hopeful nation? Off the top of my little gray head, I can't remember what he read and didn't understand at the time. I do remember my parents being transfixed, which conveyed the importance of the moment to me.

Andy, since I am a) slightly older than you and b) used to teach 4th grade, I can tell you that Robert Frost recited The Gift Outright from memory. He had written a new poem for the event but there was a glitch and he was unable to read the new poem so he substituted.

Frost says deep things with simple words that children can read and understand. Later, they will read the same poem and have a different experience but teachers love his poetry for their ability to help explain word choice, rhyme, and rhyme scheme.

Thanks for sharing, Diane.

I can so picture this scene. Thrush song is haunting and stops me in my tracks. My parents moved to Derry when I was in college so I spent some summertime there and was happy to be near Frost's farm place. His poetry is so deep and beautiful!

I'm not a New Englander, but I love Robert Frost. Thanks, Diane.