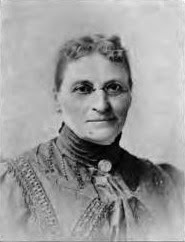 Once we've finished an "American Notable Women" series book, names of women we missed always seem to come up. Of course, after the Massachusetts book was finished, I came across a woman by the name of Linda Richards.

Linda was born in Potsdam, New York, in 1841. She had had experience caring for her mother who contracted and died of tuberculosis when Richards was only 13. She wanted to study medicine, instead she became a teacher, and then went to work in a factory. But, in 1870, she was was able to find a job at Boston City Hospital. Unfortunately she received little or no training at BCH. At about the same time, the New England Hospital for Women and Children started up a school for nurses. Linda enrolled in the new school and was awarded her diploma, said to be the school's first, in 1873. Four years later she traveled to England where she studied under the famed Florence Nightingale, and upon her return to Boston, Richards established a nursing school at Boston City Hospital teaching students according to Nightingale's system.

Richards went to Japan and spent five years there setting up a nursing school in Kyoto. She also set up nursing schools in Pennsylvania and Michigan. She was a busy woman!

In 1911, Linda's book, Reminiscences of Linda Richards: America's First Trained Nurse, was published. It is now available online if you'd care to read more about this fascinating woman. (The picture of Richards above, is taken from that book.)

July 27 is Linda's 169th birthday. Happy birthday, Linda, and I apologize for not recognizing you earlier as being one of America's "notable women."