Sometimes women have to be patient in their desires to effect change within society. Baby steps add up!

Helen Herron Taft, wife of William Howard Taft, our 27th president, was a woman who knew changes would come, but she was willing to start small.

Mrs. Taft wrote about her husband's inauguration, in 1909, in her autobiography:

Since the ex-President was not going to ride back to the White House with his successor, I decided that I would. No President's wife had ever done it before, but as long as precedents were being disregarded I thought it might not be too great a risk for me to disregard this one. Of course, there was objection. Some of the Inaugural Committee expressed their disapproval, but I had my way and in spite of protests took my place at my husband's side. 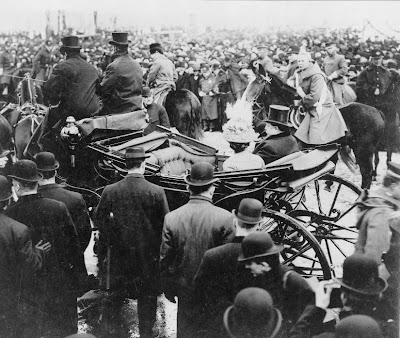 Here's a picture of Helen Taft. I bet she wasn't afraid of anyone's opinion! 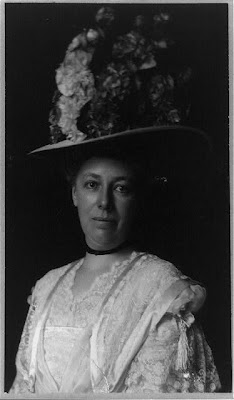 President Taft's predecessor in the White House was Teddy Roosevelt. Roosevelt didn't refuse to ride with Taft for political reasons, it was simply personal--he didn't want to do it. Mrs. Taft told her readers that Mr. Roosevelt thought that riding with the new president back to the White House after the ceremony was "a precedent which he did not like and which he desired to break." But I think, that Roosevelt wanted out of Washington ASAP!

I love the idea that old, out of print works like Helen Taft's autobiography, are now available online, don't you?
Posted by Diane at 7:02 AM

I love the availability of on-line research, too, Diane.

But I love THE hat better.