Poetry Friday--"Give Me Your Tired, Your Poor"

I know this is going to sound ridiculous, but I woke up in the middle of the night last week with the lines, "Give me your tired, your poor..." running through my head. When I was in elementary school, I sang in the chorus and one of the numbers we sang was based on the poem by Emma Lazarus, "The New Colossus." (The music was composed by Irving Berlin.)

Lazarus's poem is inscribed on a plaque at the base of the Statue of Liberty and expresses America's welcoming attitude to the immigrants coming into the country in the later part of the 19th century.

America's arms opened, and closed, for immigrants over the course of our history. Her welcome has depended upon economics, fear, and any number of other factors. Right now it seems her arms are clasped tightly across her chest. For how long? 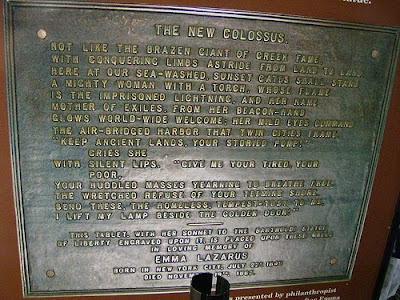 The words of the poem/song are colorful--"huddled masses yearning," "wretched refuse," "homeless, tempest-tost"--and obviously quite memorable since I can still sing the words 50 years later!

I'm sure when my school chorus performed the song, it must have sounded a little like this:

Check out this week's edition of the Poetry Friday Round-Up found at Susan Taylor Brown's blog.

Yes, timely. I don't know why I woke with the song running through my head, but I'm sure I must have heard news of immigrant "problems" the evening before. I sure hope that Abraham Lincoln's faith in the "better angels of our nature" was well-founded.

Thanks for bringing back a great memory of my high school Glee Club days! I can still sing it, too. Our rendition, as I recall, was slower and more stately but whoever sings it, it still touches my heart.

I sang it too. And still remember the words.