There’s something about a tree. Imagine standing in one place for an entire lifetime. No wonder they grow so tall. They have to if they want to see anything of the world. And those ever-reaching branches? Are they the tree’s attempt to reach out, to touch and feel the things that must seem so far away? And do they stand there and proudly admire their offspring, growing up ten feet away, and another ten feet away, thinking of the day, generations ahead, when one of them might finally reach that distant ocean? Below is a story of two trees, by May Swenson. 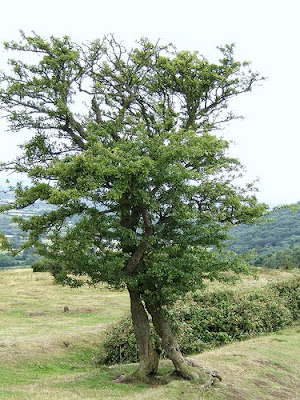 I saw two trees embracing.
One leaned on the other
as if to throw her down.
But she was the upright one.
Since their twin youth, maybe she
had been pulling him toward her
all that time,

and finally almost uprooted him.
He was the thin, dry, insecure one,
the most wind-warped, you could see.
And where their tops tangled,
it looked like he was crying
on her shoulder.
On the other hand, maybe he

had been trying to weaken her,
break her, or at least
make her bend
over backwards for him
just a little bit.
And all that time
she was standing up to him

the best she could.
She was the most stubborn,
the straight one, that’s a fact.
But he had been willing
to change himself -
even if it was for the worse -
all that time.

At the top, they looked like one
tree, where they were embracing.
It was plain they’d be
always together.
Too late now to part.
When the wind blew, you could hear
them rubbing on each other.

Today's poetry roundup is at A Wrung Sponge.
If you're not a tree, you should get there easily.

Email ThisBlogThis!Share to TwitterShare to FacebookShare to Pinterest
Labels: All That Time, Cross Duck, May Swenson, Poetry Friday

This is a great poem, Barb! I just came back from a walk. When I walk early in the morning I often find myself looking up into the treetops, I hardly ever do that later in the day--too many cars to watch out for.

Fabulous! I wish I could see the world the way poets do.

Thanks, Barbara. I like May Swenson. She wrote a tree poem in protest after some lovely old maples were felled in York, Maine.

Great poem and GREAT accompanying picture! Yes, it's a little creepy, but is that because the trees so closely mimic human relationships?

Yes, Mary Lee. That's definitely why it gives me the willies!

Hope you all have a great weekend!!!

I'm not familiar with that poem, Joyce, but I like the fact that she generally has something to say.

And I guess this happens a lot with trees, Mary Lee. I had lots of photos to choose from.

As for the willies, I always imagined that if it's alive, it must think and feel in some way. It makes you think a bit before you twist that tomato off the vine, let alone slice it.