Mentor Monday: Putting [Your] Life into Your Stories 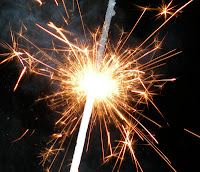 On that particularly perfect 4th of July, Lou and her cousins spent most of the day swimming in the river. They came out only long enough to grab something to eat. They planned these sojourns to the picnic table carefully, however. Putting ANY food in your mouth meant Mom or one of the aunts would force you to sit out for at least a half and hour so your food could” digest” and you wouldn’t die of cramping in the river’s slow current.

Dad and the uncles spent most of the day planting trees along the camp border line. The trees were young white pines dug up from the nearby woods. Their long, soft needles drooped a bit from the trauma of being pulled from the earth. Dad said they’d be fine in a few days and just needed a good dose of water after they were replanted.

Everybody hung around ‘til dark because neighbors up and down the river would parade by in their boats strung with Christmas lights to celebrate Independence Day.

Grandma opened a couple of boxes of sparklers for the children and the uncles who smoked lit them up. Lou held hers like a magic wand, sending shiny good wishes into the night. She swung her arm quickly trying to make a figure-eight stay in the air but part of it always disappeared before she completed the loop.

When it was over, Grandma gave her another and Lou watched the dark shadows come and go in the moving light of the children’s sparklers. The baby trees looked sad in their new formation but Lou thought she knew how to make them look better. She held her sparkler in the branches of the first one and for a minute, it did look like a joyful Christmas tree.

Then the yelling started and Dad was running towards the tree, tossing a full bucket of water on its burning branches. It wasn’t ‘til that moment that Lou realized the lights from her sparkler were not magic at all. They were just fire, waiting to eat something up.

Parts of this story are true. I was Lou and I did once burn down a tree my father had just planted by holding a sparkler to the branches. As for the rest, well, most of it is true, too, but not necessarily accurate to this event. The thing is, while I remember the action of holding the sparkler in the tree and its subsequent demise, I don’t really remember what came before or after. I’m guessing it was 4th of July because sparklers weren’t available to us at any other time of the year. My aunts, uncles, cousins, and grandparents often gathered at our river camp in the summer to picnic and swim. Were they there on that particular day? Maybe. And, I left out a lot—like my 4 younger siblings.

One of the problems I often encountered with members of my beginners writer’s group was the need to tell a story exactly the way it had happened. This was especially true of those writers who thought that a particular childhood event would make a good picture book. Unfortunately, our lives are not necessarily interesting to other people. Laura Ingalls made her life interesting by writing her stories in the third person. Doing so freed her to invent dialogue and put events in an order that created interest and tension. In the meantime, we the readers learned the truth about the lives of 19th century settler families.

In his book, Writing Life Stories, author and educator Bill Roorbach said, “…When I ask students in fiction classes for more drama in a given scene, they will often say, ‘But that’s the way it really happened!’ Conversely, students in nonfiction classes: ‘But that’s not the way it happened!’ To me the first goal, the first excellence, is artistic. The needs of other excellences, such as mere accuracy, must follow the needs of drama in a kind of hierarchy that helps make decisions as I write.”

What I was trying to accomplish in the short bit that I opened with in this post, is to tell the story of a moment when naiveté met truth. The story still needs lots of work but I’ve started setting a scene and adding characters. I don’t think I’ve reached the point where this story can be thought of as universal. Maybe, if I keep following the “needs of drama” in my rewrites, I’ll find a way to make the event work well enough so that a reader will finish the story and think: “I remember when that happened to me.” The reader won’t be remembering a burning pine tree but will, instead, call to mind a moment when a little bit of childhood was lost.

In the end, the memory of the tree burning by the river may disappear entirely. What really happened on that day is not as important as the feelings it generated in my young mind. That’s the part “that really happened” that belongs in your story.
Posted by Mur at 7:59 AM

A well written and artistic vignette, M. It felt very universal to me, even though I never burned down a little tree . . .