A few of us—Hillary Clinton, Vlad Dracula,
Oprah Winfrey, and Trotsky—peer through
the kitchen window at a raccoon perched
outside on a picnic table where it picks
over chips, veggies, olives, and a chunk of pâte.
Behind us others crowd the hallway, many more
dance in the living room. Trotsky fusses with the bloody
screwdriver puttied to her forehead.
Hillary Clinton, whose voice is the rumble
of a bowling ball, whose hands are hairy
to the third knuckle, lifts his rubber chin to announce,
“What a perfect mask it has!” While the Count
whistling through his plastic fangs says, “Oh,
and a nose like a chef.” Then one by one
the other masks join in: “Tail of a gambler,”
“a swashbuckler’s hips,” “feet of a cat burglar.”
Trotsky scratches herself beneath her skirt
and Hillary, whose lederhosen are so tight they form a codpiece,
wraps his legs around Trotsky’s leg and humps like a dog.
Dracula and Oprah, the married hosts, hold hands
and then let go. Meanwhile the raccoon squats on
the gherkins, extracts pimentos from olives, and sniffs
abandoned cups of beer. A ghoul in the living room
turns the music up and the house becomes a drum.
The windows buzz. “Who do you love? Who do you love?”
the singer sings. Our feathered arms, our stockinged legs.
The intricate paws, the filleting tongue.
We love what we are; we love what we’ve become. 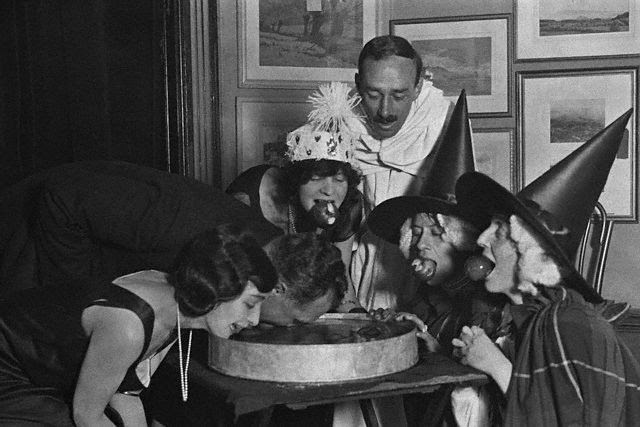 Write Sister, Diane, is hosting today, so grab a bag and head over to Random Noodling for a real treat.
Afterwards, check out Becca Klaver's Halloween Sampler over at The Poetry Foundation.
The top photo is by legendary photojournalist, Robert Capa. You can read more about him here.
Posted by I'm Jet . . . at 2:52 AM

I don't know which is creepier--the poem or the photos!

Then my work here is done!

Kind of a weird story about this. I had read about Robert Capa at Writers Alamanac, and looked up his images.

That's where I found Monsieur Raccoon (as I call him). I posted the picture as a draft and then went looking for a poem. I found the Michael Collier poem at Poetry Foundation.

Then I went back and read more about Capa and discovered that he was one of Trotsky's death photographers.

Ha ha! I agree with Diane... and thanks for the link to the short Robert Capa bio - very interesting.

Definitely not my kind of party, Janet! Very creepy. Yes, what a coincidence that Capa and Collier meet through Trotsky.

This is the weirdest post ever -- great photo in all its creepiness. Had never heard of Capa. The poem took my head off (mmmwwaahahahaahaha!)

Your work here is done.

This is just the creepiest, and I love it! Makes me think of John Waters. If he gave a Halloween party, I think those people would all show up.

The only one at that party who is not pretending to be someone else is the one who wears a permanent mask!

Oh so enjoyable! It strikes me that there aren't more poems about dressing up, since writing a poem is often just that: becoming someone else and loving both who you are and who you've become.

I want to go to a party where "the house becomes a drum"!