Women of Wednesday: On the Mayflower

Since today is the eve of Thanksgiving, it seems appropriate to nod in the direction of those incredibly brave women (some of them nameless to history) who stepped into that little ship and crossed the Atlantic in 1620.  They faced both the known dangers of the sea crossing and the unknown dangers of the wild land ahead; the sorrow of leaving behind friends and families; the certain struggles of daily life (not easy for women anywhere in that time) and the uncertain ones of establishing a new community.  Just 29 women and girls sailed on the Mayflower, consensus seems to be that there were 18 married women, a few daughters and maid-servants of nearly-marriageable age, and a few girl-children.  Only four of the 18 wives survived to celebrate that first Thanksgiving - and to maintain the distaff side of the tasks of living in the little village. 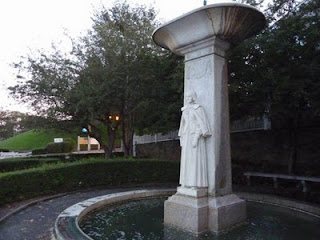 Pricilla Mullins gets all the press, romanticized by the story-tellers and myth-makers.  The Mayflower Women memorial, erected in 1920, records the names (if known) of all 29. An ongoing project is attempting to identify and reconstruct the lineages of all the Mayflower women.

Thousands more would follow them, of course - including the four women whose husbands left them behind in England, who came over in 1923 to join their husbands.  And even though more than 10,000 arrived in New England over the next 20 years, and the risks and challenges were great for all of them, none faced quite the dire circumstances of those first "foremothers."

Tomorrow when getting dinner on the table starts to feel overwhelming, I hope I'll remember what that first Thanksgiving was really like, and take a minute to honor women who faced challenges I can't even imagine.
Posted by Sally at 5:03 PM

"Tomorrow when getting dinner on the table starts to feel overwhelming, I hope I'll remember what that first Thanksgiving was really like, and take a minute to honor women who faced challenges I can't even imagine."