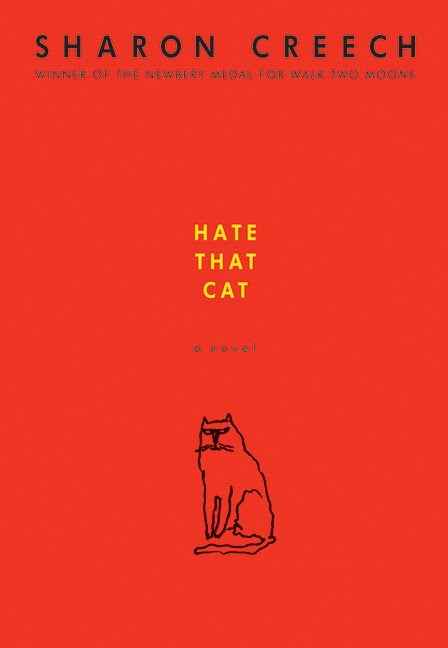 Hate That Cat is a novel written in poetry. It is the sequel to Creech's Love that Dog. Like the first book, it is the story of Jack who must write comments about the weekly poetry lesson in a classroom journal. Jack's teacher, Miss Stretchberry has followed her class to the next grade. Jack is happy about this fact because Miss Stretchberry "understands my brain."

The journal takes us through the school year as Jack sorts out his feelings about his dog's death, his fear of cats, and his love of words. Jack tries his hand at poetry, too, and we see him use his new-found writing skills as he attempts to mimic some of the master poets his teacher introduces to the class.
Teachers will find a year's worth of poetry lesson plans in this little novel. Creech has rounded up a nice collection of easy to read verses by some of our most respected writers such as:

This Is Just To Say
by William Carlos Williams

I listened to the audio version of the story and I highly recommend it. The narrator, Scott Wolf, does a fabulous job of putting us in Jack's head. And, at just slightly over an hour, it's a great way to entertain yourself while running errands.
This week's roundup is being hosted by Laura Salas: http://laurasalas.livejournal.com/
Posted by Mur at 1:00 AM

I loved both books, but "Love That Dog" is my favorite because Jack is discovering poetry for the first time.

Love "love that boy"
Thanks for sharing!

Those poems are so great! I'll have to check those books out.

HELP!!! What is the differnce in the relationship between Jack and Sky and Jack and Skitter

Dear Anonymous: It may be better if you read the book rather than asking others to give you the answer. If you don't understand the assignment, then perhaps you should ask your teacher for help. Good luck.