If you don't know the name Oney Judge, you may be surprised to find that she was a slave owned by none other than Martha Washington, wife of our first president.

(When I was growing up, I didn't know that George Washington owned slaves. It's one of those facts that somehow never got mentioned.)

Oney's story is probably typical of many slave women during the late 1700s--she was light skinned and therefore she became a house slave, rather than a field hand. According to Washington, she was "was brought up and treated more like a child than a servant." 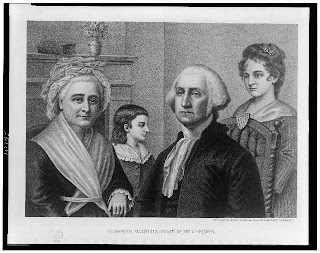 In 1796, this young woman gave up her "privileged" situation as Martha's personal slave and risked her life for freedom. Through the help of friends, she managed to walk away from the Washington home, hide, and then board a ship.

I told her story in Women of Granite: 25 New Hampshire Women You Should Know. Why does her profile appear in a book of NH women? Because the ship she escaped on headed to Portsmouth, NH.

It was a risky move. Slavery was still legal in NH at that time, but it was not widely practiced. As a matter of fact, census records after 1800, never showed more than 8 slaves (and sometimes none) in the entire state. Public opinion was definitely opposed to slavery.

Washington wanted to have Oney captured and sent back to him. Ever concerned with public opinion, though, he instructed his representative,

I do not mean however, by this request, that such violent measures should be used as would excite a mob or riot, which might be the case if she has adherents, or even uneasy Sensations in the Minds of well disposed Citizens...

Despite several attempts Washington was ultimately unsuccessful. After a harrowing escape from Portsmouth, Oney spent the rest of her life in Greenland, NH. She lived in the poorest of circumstances until her death in 1848.

Fifty years after her escape she was interviewed. The Rev. Benjamin Chase, in a letter to the editor of The Liberator wrote

This woman is yet a slave. If Washington could have got her and her child, they were constitutionally his; and if Mrs. Washington's heirs were now to claim her, and take her before Judge Woodbury, and prove their title, he would be bound, upon his oath, to deliver her up to them.

Imagine living for 50 years, not quite free, and always with the idea that you could be captured and sent back into slavery! Such a sad, sad, story.

Yes, a sad story, but a very courageous one. Good posting, D.

Great job on both posts, Diane.

is that little girl in the picture really her? also great job posting

No, that little girl isn't Oney Judge, it is just a picture of Washington at Mount Vernon. The girl is probably a relative.