Many of the women profiled in the America's Notable Women Series had one thing in common. They didn't care what other people thought of them. This is huge. How many times have you not done something for fear of failing or looking ridiculous? Certainly not Isabella Stewart Gardner. In fact, she welcomed disapproval.

Isabella was born in New York City on April 14, 1840 into wealth and privilege. She learned early on that an elevated station in life couldn't stop bad things from happening when her little sister Adelia died. The death of a child was not an unusual occurrence in 1853, but the family's coping mechanism was. They moved to France, where they lived from 1856 through 1858. Isabella attended finishing school in Paris. She became friends with a girl who would introduce her to John "Jack" Lowell Gardner, Jr.

Isabella and Jack married in 1860 and settled in Boston. In June 1863, Isabella gave birth to John "Jackie" Lowell Gardner III. She was blissfully in love with her Jack and Jackie. Life couldn't have been any better, but those happy days were numbered. Baby Jackie died of pneumonia in March 1864 and Isabella plunged into a severe depression.

Isabella was inconsolable for nearly two years. Upon her phycisian's advice, Jack took Isabella to Europe. Like her mother before her, she found solace in travel. She returned to America a healthy, happy woman.

By this time, Isabella was known as Mrs. Jack and she was determined to live life on her terms. Essentially, her terms were the more outrageous, the better. At a time when women (especially women of her standing) were expected to be proper ladies, Isabella was drinking beer and racing her car around town. She loved sports and went to boxing matches, football games and baseball games. She had two diamonds fastened to springs and wore them like antennae. Talk about bling-bling.

Boston society rejected her, but since her friends were artists, suffragists and professors she didn't give a hoot. She inspired several characters in Henry James's books, and John Singer Sargent painted her portrait. (I love the contrast between the Sargent portrait above, done in 1888, and the one below done in 1922.)

Boston's rumor mill ran rampant around Isabella. One story had Isabella walking a lion on a leash. Isabella often said, "Don't spoil a good story by telling the truth." That's one way to keep people talking. Stunts are another. Isabella once spent an evening with the Brahmins listening to the Boston Symphony Orchestra. She was impeccably dressed and exquisitely coiffed. She had fashioned a white headband around her red hair. Upon the band she'd written these words in red: Oh you Red Sox! The resultant stares, snickers and gasps were exactly what she wanted.

Isabella could have gone on like this forever. With her money she could have been the poster girl for the idle rich. Instead, she found her passion and pursued it relentlessly. She collected art. In 1917, she wrote to a friend, "Years ago I decided that the greatest need in our country was art."

Her collection included important paintings, sculptures, silver, tapestries, rare books and more. She put together one of America's first great art collections, and then designed a building i 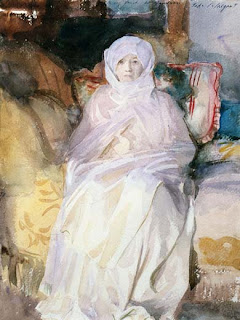 n which to house this collection. Fenway Court was built to resemble an Italian palace. She personally supervised the placement of every last piece, and then took up residence in an apartment on the fourth floor. She opened her home to the public, and the Isabella Stewart Gardner Museum was born.

Isabella died at Fenway Court on June 17, 1924 but she remains an ever-present force within the walls of Fenway Court. Isabella ordered that all the art work must remain exactly as she arranged it. If it is moved or changed in any way, the entire collection must be sold. The museum appears much the same today as it did the day it opened.

In a way, Isabella is still turning heads. In 1990, two thieves dressed as police officers overpowered the guards at the Isabella Stewart Gardner Museum and stole 13 works of art valued at around 300 million dollars. Despite a 5 million dollar reward, the art work has yet to be recovered, and remains the largest art heist in modern history. I don't know if Isabella is rolling over in her grave, or loving all the attention.
Posted by Andrea Murphy at 11:33 AM

Andy-
I love Isabella. What a hoot she was. But the lion story? I think it was more than a rumor - I'm nearly certain that there is a newspaper picture of her in the ISG museum walking a large feline on a leash - but I think it's a cougar or possibly a jaguar. . . . that shape.

I heard the story as a pair of panthers.

Lions and cougars and jaguars, oh, my! There are so many stories swirling around Isabella! The lion story is surely grounded in fact, but what those facts are is open to debate. One reliable source called it a rumor. Another said newspapers carried sketches of Isabella strolling with lions (plural) borrowed from a zoo, which, if there is a truth involved, is probably closest to the truth. Isabella encouraged rumor and innuendo. I don't think she wanted us getting anywhere near the truth about her. She spent many mornings in her later years burning her personal papers.