We live in a far more progressive era than did our mothers and grandmothers. Not that long ago, women were considered to be inferior to men. Simply because they weren't male, they did not inherit land or money. They weren't allowed to make decisions. They could not spend their own wages! Suffragist Lucy Stone noted, "If a woman earned a dollar by scrubbing, her husband had a right to take the dollar and go and get drunk with it and beat her afterwards. It was his dollar."

Women were refused the vote because they were mentally incapable of making an informed decision! Nowadays we're still fighting to prove women are capable of becoming leaders. 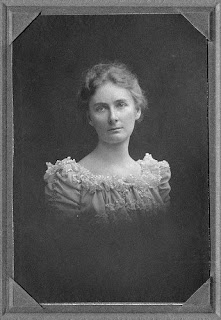 The list of past insults and indignities to women goes on and on. And, just in case you think I exaggerate, let me relate an indignity suffered by Florence Bascom, the first woman to work for the U.S. Geological Survey.

Florence Bascom was born in 1862. The daughter of educators, Florence excelled in her studies. She graduated from high school at the age of 15 and from the University of Wisconsin with two bachelor's degrees. Shortly thereafter, she earned a third. After gaining her master's degree in science, she wanted to continue her studies in geology at Johns Hopkins University. At the time, no woman had earned a doctorate from Johns Hopkins. It was reported that Florence had to sit behind a screen in the classroom so as not to distract the men!

Let me conclude this little rant with another quote by Lucy Stone, "Now all we need is to continue to speak the truth fearlessly, and we shall add to our number those who will turn the scale to the side of equal and full justice in all things."

We've come a long way, and yet still so far to go!