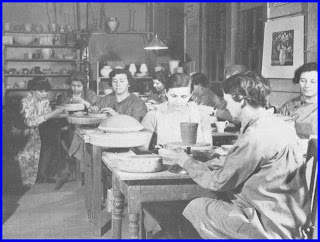 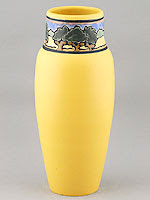 So, okay. Not Women. Not Wednesday.

The Saturday Evening Girls got their start during the late 19th century -- due to the convergence of three movements. The Settlement House movement began in London as a way to help the poor -- to give them food, shelter, and a way to make a living. In the US, the name most associated with this movement is Chicago's Jane Addams.

The women's movement focused more attention on women's economic and social needs. The Arts and Crafts movement was also getting its start. It emphasized pride in craftsmanship as people search 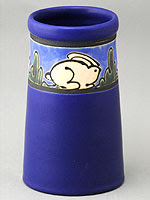 ed for an antidote to the mass produced goods of the Industrial Revolution.

The Saturday Evening Girls started in 1899 as a club through the Boston Public Library that provided education and social activities for young immigrant girls. Local philanthropists hoped their contribution would keep girls off the streets. Many girls had to work to provide an income for their families, which meant no time for school.

Under the guidance of Edith Brown and Edith Guerrier, with assistance from Helen Storrow, the group eventually turned to making and selling pottery as a way to pay for the organization's summer camps.

The small business was called Paul Revere Pottery for the group's proximity to the historic location in the North End where Paul Revere worked his silver one hundred years earlier.

The club helped young women develop not only the skills of decorating pottery, but also business skills to go along with it. Local department stores and other retail ventures bought the girls' lovely pieces.. 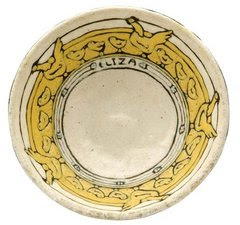 According to the Museum of Fine Arts, volunteers read to the girls as they worked. One mug is inscribed "In the forest must always be a nightingale & in the soul a faith so faithful that it comes back even after it has been slain," a verse from the 1910 play Chantecler by Edmond Rostand."

The MFA provides this review from writer Margaret Pendleton in 1910: "The glaze is dull, soft in color and texture…The colors are pure yellow, soft green, old blue and a tan. Their success in color scheme is wonderful." The girls decorated children's pottery and kitchen sets.

The most accomplished of the SEG was Sara Galner.

The Museum of Fine Arts in Boston has a collection of Saturday Evening Girls' pottery, and has this to say about Sara:

"The vast majority of works in the collection were decorated by one of the Pottery's best artists, Sara Galner, the mother of the collection's donor. Galner, a Jewish immigrant from Austria-Hungary, joined the reading club as a young girl and later worked at the Pottery until her marriage. Objects bearing her signature span at least ten years, including some of the earliest years of the Pottery's production and the height of their artistic achievement and success in the mid-1910s. Examples of her work show the Pottery's efforts to refine both materials and technique, as well 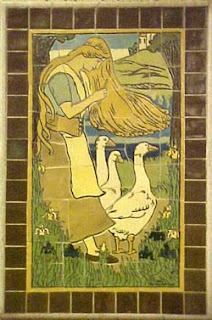 as Galner's own refinement and maturity as an artist."

When you get to the page, click on the Interactive Exhibition Preview near the top of the page.
Posted by I'm Jet . . . at 8:21 PM

I like the way our research parallels and intersects! --Diane

Very cool, Jet! You have a way of finding these interesting, quirky stories. Wonder how much the stuff sells for today. It's gorgeous!