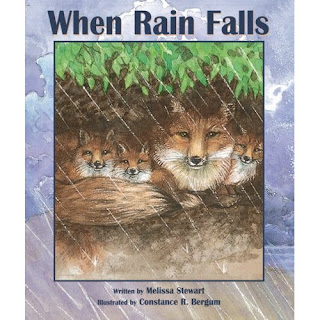 If you want your writing to sing like Pavarotti, you have to read what you write. I'm not talking about proofreading what you've written, I'm talking about reading within your chosen genre. I've been teaching preschool and accumulating picture books for the last 29 years. Even though I have close to a thousand picture books in my personal collection, I still hit the library or bookstore a few times a month just to read picture books. I'm always on the lookout for books to add to my collection, which doubles as my preschool's library. When Rain Falls written by Melissa Stewart and illustrated by Constance R. Bergum is my latest purchase.

I initially picked this book up to examine for two reasons. I'm always looking for good read-alouds for story time, and I knew the picture on the cover would speak to my little students. The subject matter, too, would be great for a rainy day story time. Right off the bat I had a visually appealing book with a terrific subject.

The story started in the end papers, with an illustration of a girl and boy in a pastoral setting flying a kite, oblivious to the storm approaching from behind. A page turn to the title page found the children turning to face the storm. The next page turn pictured the children fleeing, holding the kite umbrella-like and laughing as they raced for shelter. Before even reading a word, I was drawn into the story.

The actual text started, "Inside clouds, water droplets budge and bump, crash and clump. The drops grow larger and larger, heavier and heavier until they fall to the earth." Fantastic! I had a science lesson wrapped in a lushly-illustrated story. I read through the rest of the book to see if it was teachy-preachy, which would have been the kiss of death for me. It wasn't, but I did have one little problem, which I'll talk about later. It didn't keep me from buying the book, however. Little problem aside, I knew I had a keeper.

The real test of this book still lay ahead. Would it pass muster with my students? I'm a pretty good judge of what my students will and will not like, and I was sure they'd give this the thumbs up. I must say I was surprised when I read it to them. They didn't like it. They loved it. I read it in all 3 classes I teach, and without exception it was a huge hit. It took looking at it through my students' eyes for me to realize exactly how appealing this book is to preschoolers.

My students range in age from young 3s to almost 6, and that book caught the attention of every last child. Why? Number one, the subject matter is familiar. Children have a frame of reference for rain. Extend that frame of reference to give them an aha moment, and you've got a winner. The aha moment here is that there are animals out there sheltering from the storm. People aren't the only ones who want to get out of the rain. Melissa took something familiar and gave her young readers something new to think about.

Number two, it gives jumping off places for discussion and further exploration. It takes us up into a beehive and down inside an ants' nest. We're left wondering if a spider's carefully built web will survive the storm.

Number three, it creates delicious tension. At one point, a raindrop knocks a ladybug off a flower. "The insect bounces into the air and then tumbles to the ground."

That prompted one of my 4-year old boys to shout, "Did he die?!" He was completely invested in that ladybug.

Which brings me to point number four. It gives the reader something to care about. The children wanted to know what the author wanted to tell them.

Like I said earlier, I only had one problem with the book. As the story unfolds, the reader moves through what appears to be the kite-flying children's world. We start out in their neighborhood where the kids take shelter in a house while the reader moves to the forest, which felt like an extension of the neighborhood. We see squirrels, chickadees, hawks, deer, and foxes, then it's on to a field filled with wildflowers and backyard-type insects. Nothing too exotic here. From there we head over to a wetland with cattails, turtles, whirligig beetles, sparrows and ducks. We could practically walk back to the neighborhood from here.

The next page turn finds us in the desert. Whoa! I've been taken completely out of the story. Where the heck did that rattlesnake come from, to say nothing of the cactus, tarantula, elf owl and spadefoot toad. How did we get geographically so far removed from the kite-flying kids? I understand that Melissa is showing rain in a variety of habitats, but trying to cram as many habitats as possible into one story felt a tad forced. Those kite-flying kids anchor the story in one place, and I found the move to the desert jarring and unnecessary.

It didn't bother my students in the least, probably because they have a limited geographical frame of reference. Or maybe because they're still at an age where magical thinking is the norm (Santa, the tooth fairy, etc.) that moving from mallards to tarantulas was no big deal. It also didn't bother the editor at Peachtree, so it's quite possible it's just a "thing" for me.

That said, it's still a fantastic book and a great example of top-notch creative nonfiction. In fact, it would make a terrific read in the Northeast today where the rain seems to be a permanent resident.
Posted by Andrea Murphy at 12:10 AM

Thanks for letting see how you read a book critically. It's a skill that's lacking. Too many reviews are only written to praise without taking into consideration what doesn't work, or what could be improved. Writers need analysis and direction as well as praise.