There are some women in the world who are highly accomplished in a particular field, but who completely fail at being admirable human beings. In selecting women for the "Notable Women" series, we've come across a few. 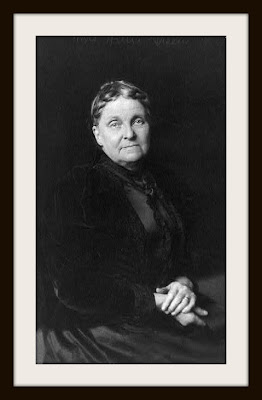 Here's how Time magazine described Hetty, in an obituary of her son, Edward (Ned):

the penny-pinching "Witch of Wall Street" who used to shuttle between Brooklyn and Hoboken to avoid establishing residence and paying taxes while she was making millions in the stockmarket.

There are many stories about Hetty that are practically unbelievable, and yet...

1. Already a multi-millionaire, she contested her aunt's will in court (money was to have gone to charity). It was alleged, and experts testified, that Hetty had forged her aunt's signature on documents.

2. After suffering from a knee injury for two years, she finally took her son to a charity hospital. There, upon recognition, he was refused treatment without payment. Hetty left without having him treated. The result? Ned lost his leg.

3. She chose to live in boarding houses and use public transportation to save money.

4. She only owned one black skirt which she wore until it became tattered enough to require replacement, only then did she purchase another one. (There are also stories of her sitting around in her underwear while her one-and-only skirt was being cleaned.)

Here's quote from Hetty herself when she was questioned about why she needed a firearm, "Mostly to protect myself against lawyers. I'm not much afraid of burglars or highwaymen." Whether she said this in jest, or not, is another question.

On the basis of her wealth and her shrewdness in investing, Hetty was definitely "notable," but, should a woman like Hetty be included in a collection of "notable women" for children? What do you think?

Well, I wouldn't put her in a book of hard-working self-sacrificing women, but I wouldn't have a problem putting her in a children's book of like-minded women or a bio of her own. Not to praise her accomplishment, but to show that not everything is sweetness and light, and there are dark sides to people, and that drive and ambition can take wrong turns.

But what would really interest me is the 'why.' To have all that money and not spend any of it? Not on her own child? Not even on herself? Was she a woman scared to death to be broke because of her earlier life experiences, or did she simply become addicted to watching the numbers grow? That's what I'd like to know.

I wouldn't include her, just because there are SO many women screaming out for recognition and so few pages in which to recognize them. Not to minimize the significance of a woman accumulating that kind of wealth on her own at that time, but what did her "achievements" in the world of finance do to advance anything beyond her personal fortunes?

She'd probably come off as a demon-freak whose accomplishments are over-shadowed by her demon-freakishness.