Mentor Monday - One Sentence at a Time 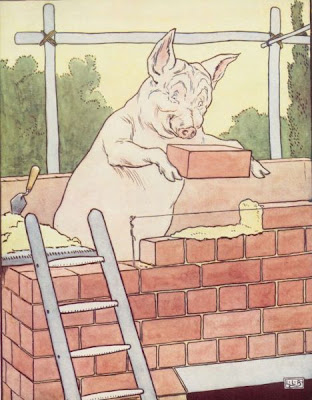 Brick may be strong building material, but that doesn’t necessarily mean it will make a strong house. Pile your bricks one on top of the other and you’ll find your walls collapsing and your house caving in. What gives brick strength is how it is positioned.

There are lots of ways to do this. Here are a just a few.

Don’t add description, similes and metaphors for no reason. Show what needs to be shown, and get out.

Let’s say Jane is playing jump rope, trying to set a new record for most jumps without tripping up.

Weak - Jane jumped over the blue plastic jump rope that her mother bought for her at Walmart on her last birthday. She jumped over and over beneath a cloudless blue sky.

Strong - Jane jumped over the rope again and again.

What matters here is that Jane is jumping rope, not the rope’s color or where and why it was bought, and not the state of the sky. It’s information overload. The reader just doesn’t care. And even if it's beautifully written, if it doesn’t advance the plot, it’s not needed.


Put Things in the Order in which They Happen.

Both are simple sentences, but in the first sentence, Mary’s laugh comes before the fall. The reader, for a few short moments, has no idea why she’s laughing. In the second sentence, cause and effect comes into play. I fall and then Mary laughs, which is not only clearer, but the way it works in real life. Also, the first sentence is passive and telling. The second is active and showing.

Lots of examples here. The first is clunky reading and passive. The next two are easier to read, but still telling. The last one is easy reading and places us in the situation with Mary. We see Mary reacting, rather than being told how she reacted.

This is a bit trickier, but the idea is to take the important thought of the sentence and place it where it will have the most power. Let’s say Dr. Hackensaw is about to operate on his patient. This is the scene that will open the novel, chapter or paragraph.

The important word here is ‘sliced.’ That’s the image we want the reader to see. Sticking it at the beginning of the sentence (first example) gives it more power than placing it at the end of the sentence (second example) because it’s the first verb the reader sees. Their focus is on the slice rather than the doctor leaning over a man. It also gives the reader no frame of reference. Is Dr. Hackensaw a world-famous physician about to begin a delicate operation, or is he a deranged monster? Who knows? You have to read on to find out, which is what we all want our readers to do.

On the other hand, let’s say we want this scene to end the novel, chapter or paragraph. The second example would be the stronger choice because by now, the reader knows who Dr. Hackensaw is and what he’s intending. The goal is to leave the reader with a strong image. Placing ‘sliced’ at the end of the sentence does this. The last thing the reader sees is the image of that slice, which is much more powerful than an image of someone’s abdomen.

Once you’ve built your strong sentences, the next step is added value. A strong house is nice, but a house that’s strong and pleasant to look at is even better. Create sentences that are more than serviceable. Make them a pleasure to read. Choosing the right verb is the easiest way to do this.

In the above example, I could have said - Doctor Hackensaw operated on the patient’s abdomen. But what image does that bring to mind? Nothing visually distinct. ‘Operated’ is too broad. So what’s more specific? Dr. Hackensaw cut into his patient’s abdomen. Better. More visual. I can certainly see it. But I can’t feel it. Can I be even more precise? What does ‘cut into’ mean? That led me to slice. I can see it. I can feel it. And it even helps in creating a tone.

So where does your latest WIP stand? Have you built a novel that will pass an editor’s inspection? If so, is it a novel like so many others, or have you taken it a step beyond? Look at it again, one sentence at a time. With a bit of shifting and shuffling of bricks, you just might turn that little fixer-upper into the strongest, most beautiful house on the block.
Posted by Barbara at 4:17 PM

as always, Barb - solid, useable advice. I like it.