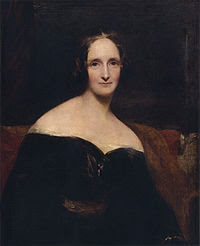 Last Halloween I had intended to write about Mary Shelley of Frankenstein fame. As it turned out, Mary Shelley had a short, but very full and complicated life - a life that could have been a Dickens novel. Except for the ending. She’d need Poe for that. But I couldn’t find any way to scrunch her life down into a short blog piece and do it justice. Well, I still haven’t figured out how to do that, but I can’t get her out of my head, so I’m giving you the all-in-one-breath version.

Mary was born in 1797, the daughter of Mary Wollstonecraft, a feminist, and William Godwin, a writer/philosopher. Her mother died shortly after her birth, and her father, forever in debt, raised her. For all his liberal leanings, he did not send her to school, but she did have access to his personal library, as well as to all the liberals he entertained at home. Her father, being a famous man, spent most of his time being famous, which left little time for work. In order to pay off his creditors, he decided to write a memoir of his far more famous wife. What he actually wrote was a tell-all tale about her affairs and her illegitimate child, Fanny, who was Mary’s older half-sister. The public found it shocking, and the family was shunned by the locals. No friends for Mary.

Time passed and Mary’s father remarried, hoping to fill his pocketbook and gain a mother for Mary. Unfortunately, while Mary liked her two new step-siblings, Charles and Claire, she couldn’t stand her step-mother. Home was not a happy place. 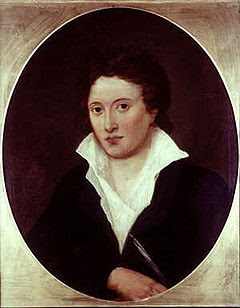 At 15, Mary met Percy Bysshe Shelley who was five years older than her. He was also married. He became a regular visitor and promised Mary’s father he’d help get him out of debt. But Percy didn’t have much money of his own. His wealthy family had disowned him because he didn’t want to own land and increase his estate. He wanted to use his money to help the poor. The idea appealed to him, but it wasn’t something he actually did. When he didn’t help Mary’s struggling father as promised, her father disowned him, too.

But Mary couldn’t live without him. To her, Percy was the ideal man, a genius of the kind her mother had written about and her father had taught about. Her father had also preached that marriage was a repressive monopoly, yet when it came to his own daughter seeing a married man, his liberalism went out the window. She was forbidden to see Percy.

Mary and Percy began to meet in secret at her mother’s grave. At 17, she ran away to France with him and her step-sister Claire. The then pregnant Mrs. Shelley was left behind to fend for herself. Mary’s step-mother came after them, but they refused to go home, and instead, they traveled through Europe, they read, they wrote, and they made love - until the money ran out.

The trio returned to England and surprise! Mary discovered she was pregnant. Her liberal father would have nothing to do with her. Since she and Percy were broke, they moved in with Claire and did more reading and writing and entertaining they couldn’t afford. Occasionally, Percy would disappear for short periods of time to avoid his creditors.

Meanwhile, the real Mrs. Shelley gave birth to a son and Percy was ecstatic. So ecstatic, he began an affair with Mary’s step-sister, Claire. He also pushed his friend, Thomas Jefferson Hogg, on Mary. Mary wasn’t surprised or stunned. She believed in free love. But she didn’t take Percy up on his offer. Percy was the only man for her.

At 17 ½, she gave birth to a premature baby girl who died. Just a few months later, she was pregnant again. Percy came into some money through a death in the family and they went on holiday, came back and bought a home. Mary gave birth to her second child. This time a son. 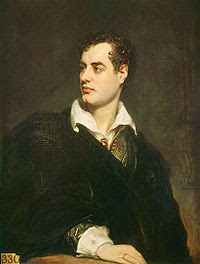 Four months later, Mary, Percy, their son, and Claire all went to Geneva to see Lord Byron, who was having an affair with Claire, now pregnant with his child. They did the usual reading and writing and talking, and one thing they talked about was Erasmus Darwin’s (Grandfather to Charles) experiments on bringing the inanimate to life with electricity. They decided they should all try their hands at a ghost story, and Mary immediately envisioned Frankenstein. She set to work.

Now the trio moved to Bath, England where they hoped to keep Claire’s pregnancy a secret. While there, Mary received a disturbing letter from her older half-sister - disturbing enough that Percy immediately set off to find her. When he did, she was dead, a laudanum bottle and a suicide note by her side. Two months later, Percy’s wife committed suicide by drowning herself. And then her family, his family, and Mary’s, did their best to see that Percy did not receive custody of his and his wife’s two children. His lawyer advised him marriage might help, so he and Mary, who was now 19 and pregnant a third time, wed. Her father began speaking to her again.

Meanwhile, Claire had a baby girl, Percy was declared an unfit father, and his children with his wife were given to strangers. Mary gave birth to her third child. They did more reading, writing, and running from creditors. Fearing debtors’ prison, they departed for Italy where Claire gave her daughter to Lord Byron and agreed to never have anything to do with her again. 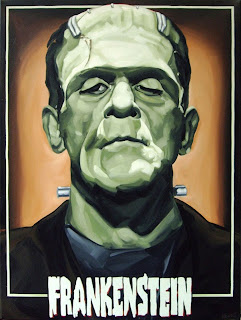 Once more, the trio set off hither and yon, reading, writing and entertaining. Mary completed her novel and sold it, and it was published anonymously. Everyone assumed it was Percy’s work. Later that year, her daughter died, and the following year, her son died. In November of 1819, at 22, she gave birth to her fourth child, another son.

At last, her writing took off and she was making money and sending it home to her in-debt father. But she was also tackling depression, a state Percy helped with by having more affairs. Then two former servants, a husband and wife, accused him of registering a child as his and Mary’s. The servants claimed the baby was Claire’s, others said it was the servant’s. All Mary knew was that it wasn’t hers. In any case, the baby died later that year.

Yet again, they moved. Their little group expanded to Percy and Mary, (pregnant a fifth time), their son, Percy Jr., Claire, and another couple, the Williams’. Claire learned the daughter she had left with Lord Byron had died of typhus in a convent, and Mary miscarried and almost died. Mary, who by now had reached the ripe old age of 24, recuperated as best she could while Percy began an affair with Mrs. Williams, and when he wasn’t spending time with her, he was off with Mr. Williams on the Williams’ boat. One day, they decided to take a small excursion and ran into a storm. Both of them, along with the cabin boy, were found dead, washed up on the beach.
Mary resolved to make a living writing so she could support her one surviving son. She wrote stories and articles, transcribed for Byron, and tried to put Percy’s poems in order. Her father-in-law gave her a pittance to help her out, and warned she’d be cut off completely if she published a biography of Percy.

Between writing and eking out a living, she managed to fall in love with Mrs. Williams, who rebuffed her by telling her that Percy had preferred her to Mary. She became friends with Washington Irving and Actor John Payne who fell in love with her and proposed, but she turned him down. After being married to one genius, she said, she could only love another. Payne’s response was to try to hook her up with Irving.

At the age of 30, she helped some lesbian friends get false passports so they could live as man and wife in France. The next year she contracted smallpox, and managed to come through unscarred.
And at last, her life began to slow down. For the next twelve years, she wrote, edited, made money, and helped her father. She sold the rights to Frankenstein for 60 Pounds. In 1836, her father died and she spent two years putting his papers together in order to write his memoirs. It was his idea, not hers, and she never finished. Her main mission was to push Percy’s work upon the world. She sold a collection of his works for 500 Pounds, but her father-in-law insisted it couldn’t contain a biography. He didn’t want the world to know about his son’s lurid life.

Mary had several opportunities to find love in her ‘later’ life. She had several suitors whom she rebuffed, while the man she was interested in married someone else, and then he married another someone else. She did a bit of traveling and in 1844, her father-in-law died, leaving her son a bit of money. But the money brought more problems.

Blackmailers came creeping out of the closets. An old acquaintance threatened to publish some letters she had sent him. Her son bribed the police to get the papers which were then destroyed. Another man, claiming to be the illegitimate son of Lord Byron, sold her back some of the letters she had written Byron, and then Percy’s cousin threatened to publish a damaging biography of Percy unless Mary paid up.

Finally, in 1848, things took a turn for the better. Percy Jr. fell in love and married. Mary loved the woman he wed and moved in with them. But the happiness didn’t last. She began having headaches and some paralysis. In 1853, she died from what is assumed to have been a brain tumor. In her desk, she left behind a box which contained locks of hair from her dead children, as well as Percy’s ashes and what remained of his heart.
Yes, she saved his actual heart.

I think about Mary and imagine what a great book the story of her life would make. I think of learning to write a screenplay because it would be one heck of a movie. But mostly I wonder if she was really the intellectual free thinker she is often portrayed to be, or was she simply a lonely teenage girl, eager to get out of a house she wasn’t happy in, who fell in love with the first man to pay attention to her. Did she love him with an obsessive love that wasn’t really love at all? Did she ever wish she and Percy could just settle down and live a normal live? Did she ever wish he’d forget his philandering ways and love only her? And what about all those dead babies? Careless parenting, horrible luck, murder?

Who knows? Not me.

What a soap opera!

Wow! She kept his heart in a box! That is so Legends-of-the-Fallish.

Had to take a Tums after reading this one! The guy who wrote "He's Just Not That Into You" would have pointed out that a first date at her mother's grave was a, pardon the pun, dead giveaway that the relationship was going to be iffy.