Mentor Monday: Getting it Right/Write 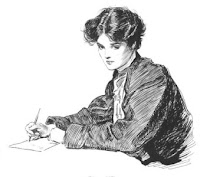 Most people cook well enough to keep themselves alive. They can sew on a popped button, or stitch up a fallen hem. They're able to maintain hundreds of Facebook friends through their daily posts. Most people, however, will never be a Top Chef, or a Christian Siriano, or a Margaret Wise Brown.

I am not a literacy snob. I understand that grammar and spelling is a challenge for some folks, and I would never want to silence anybody with an off-hand or cruel comment. That said, I've read more than a few blogs by aspiring authors that only serve to showcase their poor writing skills. If you are serious about publishing, your writing has to be first-rate. There are no second chances or do-overs in the slush pile.

Pretend for a moment that you're an editor. You're overworked, underpaid and facing a slush pile that reached unmanageable proportions forever ago. You take a chunk off the pile and start mining for diamonds. Although you don't really expect to find anything that sparkles, you're a bit of an optimist. Besides, it's your job. You tear open the first envelope and glance at the cover letter.

Enclosed is my manuscript which would be very suitible for you're company. Its about a little boy who lost his dog which every child can relate to. It actually happened to my son so I know how a story like that goes. You don't have to worry!!! LOL We found the dog and so does the boy in the story;)

Jack walked sadly into the big house. He was wearing his favorite red sneakers but that didnot make him feel good. He had his best friend in the whole world Jason with him but he was still sad. When he saw his mom he bursted into tears. "What's the matter with you! Are you hurt?" His mother said. She was very scared. "No but I lost Kahlua!" He said. "How did you loose you're dog? Didn't I teach you how to take good care of a dog? What if he gets runned over?" Jack felt worst than before. Mom gave him a great big hug and said not to worry. Even though you lost the dog we will find him. "Supermom to the rescue!" Said mom. That always made Jack laugh. "Your so funny Mrs. Daniels!!" Said Jason.

I'm not going to point out what's wrong with the cover letter snippet, or go into a critique of the story excerpt. You can pull on your editor panties and have at them.

Proper grammar and correct spelling alone do not make a story great. However, your reader will never get to the heart of your story if he or she is distracted by poor grammar and spelling. In fact, you'll probably never have a reader because you won't make it out of the slush pile.

You have to know your weaknesses. That way, you'll find your errors before sending your work off into the world. Spell check can't catch every spelling mistakes, and proofreading you're own stuff can be tricky. Even if you have a reliable proofreader, you should proofread your work several times before letting it go.

Don't let bad habits become ingrained by reinforcing them over and over in your casual writing. It's not that difficult to hit the shift key to capitalize proper names or the first word in a sentence. Take a minute to proofread everything you write, even if it's just a quick comment on Facebook. And pay special attention to your/you're personal demons. You never know when they'll raise their/there ugly little heads.
Posted by Andrea Murphy at 12:10 AM

I write good, I don't needs no stinkin' advise from you Ms. Smelly-Editor-Panties!!!!!

and don't forget to put the manuscript aside for a while before you have another go at it . . . so much stuff pops up when you do.