Rejections: The Good, the Bad, and the Ugly 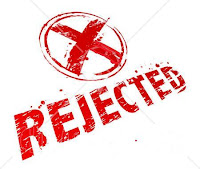 Nobody wants to have their manuscripts rejected, but anyone who’s been in this business long enough to have actually submitted something, knows rejection is part of the game. As writers, we receive far more rejections than acceptances. That’s just the way it is.

But not all rejections are created equal. While they all say the same thing - We don’t want your work - some have more value than others.

That very first rejection - If you need proof as to whether or not you’re really a writer, this is it. Display it proudly. Editors don’t send rejection letters out to just anybody.

The Form Rejection - My personal favorite. Usually it’s just two or three sentences thanking you for your manuscript and informing you it’s not for them. Straight and to the point. Some people don’t like this type of rejection because it tells them nothing as to why their manuscript was rejected. But does ‘why’ really matter? A rejection is just one person’s opinion. What one editor doesn’t like, another might love. They said they don’t want it. Move on.

The Form Rejection with Editorial Notation - This is usually a helpful hint to make the manuscript better, or a word of encouragement. It says, while your work may not be ready for prime time, it was noticed. Something stood out and made that editor want to respond. It says your work is improving.

The Personal Response - This can be good and bad. In the good category, your work has stood out enough, and made an impact on an editor. She offers you concrete ideas on what she feels works and doesn’t work. She may ask you to revise and resubmit. The letter is clear and easy to understand. It says you’re just about there.

The Personal Response - In the bad category, this is really just a form rejection from someone who doesn’t want to send a form rejection. The letter praises your work, then follows up with - but it’s not right for us. The first question that enters your mind is - But if you thought it was that good, why are you rejecting it?

The Fake Advice Letter - These letters pretend to offer helpful advice, but are so ambiguous, everyone who reads the letter interprets it differently. You don’t know what the editor means, let alone what she’s suggesting. And is she saying you can resubmit if you make the changes you think she’s suggesting? The answer is no. It’s really just a letter that says “No thanks,” from an editor who is uncomfortable saying “No thanks” and who is too nice to send a form rejection.

The Totally Honest Rejection - We don’t see too many of these in our politically correct world today, but here are a few examples of ugly rejection letters where the editors said exactly what they thought.

Lord of the Flies by William Golding - “An absurd and uninteresting fantasy which was rubbish and dull.” Rejected 20 times.

The Diary of Anne Frank - “The girl doesn’t, it seems to me, have a special perception or feeling which would lift that book above the ‘curiosity’ level.” Rejected 15 times.

Lolita by Vladimir Nabakov - “…overwhelmingly nauseating, even to an enlightened Freudian…the whole thing is an unsure cross between hideous reality and improbable fantasy. It often becomes a wild neurotic daydream…I recommend that it be buried under a stone for a thousand years.’

The You-Will-Never-Hear-From-Us-Unless-We’re-Interested rejection - This type of rejection says neither you, nor your work, warrants a reply--not even a simple ‘No thanks’ - which really says more about the publishing house than it does about your work.

So don’t take rejections personally. They really are just one person’s opinion, and as we all know, some people’s opinions are worth more than others. Take what you can from each rejection and move on. To see a good example of this, take a look at the rejection letters Dan Gutman received for his MG novel, Honus and Me.

And remember, what a rejection letter really says is that you are doing your job. You are writing and submitting, which is what writers do. Published or not, you are in the same company as William Shakespeare, Fyodor Dostoyevski, Charles Dickens and Stephenie Meyer.

Email ThisBlogThis!Share to TwitterShare to FacebookShare to Pinterest
Labels: Dan Gutman, Honus and Me, Rejection

"The letter praises your work, then follows up with - but it’s not right for us. The first question that enters your mind is - But if you thought it was that good, why are you rejecting it?"
'cause it's too long to write any or all of the following:
--Your writing sucks.
--We're already pushing a book about Grammy & Me
--We published a book on satellites last year. Didn't you check out our web site?
--We met at a conference and I promised to look at your stuff...

I could go on but I gotta Write on! Great post, Barb.

Collecting rejections is part of the writer's job. I admire people who collect them -- I was always so impressed by Sister Diane's collection. It means she was writing and submitting her very fabulous work!