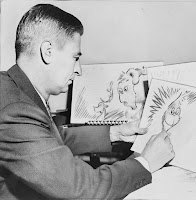 I wasn’t inspired to do a Women of Wednesday blog post, until I heard a piece on NPR about Dr. Seuss. His step-daughter said when he was in a happy mood he was the Cat in the Hat and when he was feeling curmudgeonly he was the Grinch. This got me thinking about Mrs. Seuss, so I did a little checking.
There were, as it turns out, two Mrs. Seuss (or Mrs. Geisel, actually).

The first Mrs. Seuss was Helen Palmer, an American whom Ted Geisel met when they were both at Oxford. They were married in 1927. She convinced him to become an artist and writer instead of a professor, for which the world is, I’m sure, very grateful. She was an editor and helped him with his manuscripts. She was also a children’s writer, her most famous book being Do You Know What I'm Going To Do Next Saturday, published in 1963. They were married 40 years, until Helen died tragically in 1967. They did not have any children.


The next year, Dr. Seuss married again, a long-time friend named Audrey Stone Dimond (which is a remarkable name, when you consider it). Audrey had two daughters, named Lea and Lark, who were 9 and 14 at the time. She is, I believe, still the head of Dr. Seuss Enterprises.

There turns out to be a lot of sadness around the stories of the two Mrs. Seuss, but each of them contributed to the work of a man who brought a great deal of happiness to many, many children – and adults. So cheers to both of them, and thank yous.
Posted by Sally at 5:44 PM

Behind every great man...