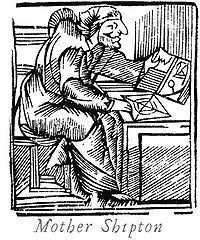 Tomorrow is New Year’s day, and what would the new year be without New Year’s predictions? Business analysts will predict the rise or fall of the stock market and the economy. Nutrition gurus will give us the skinny on the miracle foods of the coming year. Psychics will prognosticate on the futures of celebrities, and astrologers will turn to the stars for a peek at the future. And let’s not forget the Mayanists who will be telling us that no matter what the predictors predict, none of it will matter because we’re all going to die in 2012 anyway.
Prophets have been around since Biblical times, and one I've found pretty interesting is Mother Shipton, not particularly for her prophecies, but because her story is such an interesting one. She lived during the reign of Henry VII and was supposedly born in a cave in England, the daughter of a good English woman, and the devil. She was born grossly misshapen with an enormously large crooked nose, a hunched back, and one leg longer than the other. But she was good and kind and went out of her way to help people, especially with her predictions. 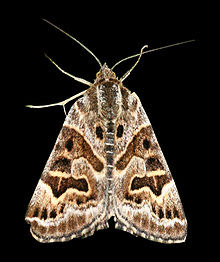 It's said she predicted the downfall of Cardinal Wolsey, the end of the Catholic Church in England, and her own death, and made predictions for several monarchs and a pope. She was so well known, they even named a moth after her.
Below are a few of her predictions first published in 1641, eighty years after her death. Make of them what you will.


Carriages without horses shall go,
And accidents fill the world with woe.
Around the world thoughts shall fly
In the twinkling of an eye.
The world upside down shall be
And gold be found at the root of a tree.
Through hills man shall ride,
And no horse be at his side.
Under water men shall walk,
Shall ride, shall sleep, shall talk.
In the air men shall be seen,
In white, in black, in green;
Iron in the water shall float,
As easily as a wooden boat.
Gold shall be found and shown
In a land that's now not known.
Fire and water shall wonders do,
England shall at last admit a foe.
The world to an end shall come,
In eighteen hundred and eighty one."
She obviously got that last bit wrong, buy hey, nobody's perfect.
My New Year's prediction for you is that you will head on over to Carol's Corner and enjoy a plethora of poetry.

Oooo, look at that moth with the witches' profiles and the devil's head at the top.

Where did you hear about this woman, Barb?

Your research skills are unparalleled, Barb! I can always count on learning something new and crazily interesting from you.

Funny how people always want to predict the end of the world. I guess that's the most attention-getting thing you can predict!

"The world to an end shall come,
In eighteen hundred and eighty one."

The prediction was wrong but the rhyme and scan weren't bad and probably that's what she needed more than accuracy. ;)

A thing I prefer about the likes of Mother Shipton is that she, unlike any number of latter-day millenialists, neither worried her contemporaries overmuch nor did she demand that they do anything silly like climb up on the roof tops to wait.*

Your own pronogstic skills are excellent, btw. I has been a fine day for poetry.

Fascinating! Her portrait in a moth's wing!

Yeah, what is it with predicting the end of the world?