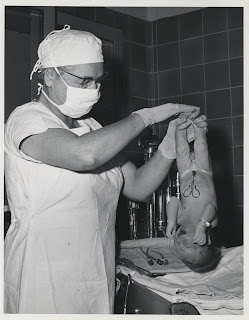 Eponymous = the lending of one's name to something, for example, the Ferris Wheel is named after its inventor, George Washington Gale Ferris, Jr. There are not as many things named after women, as there are those that have been named after men, but, there are a few. I'll start with the letter "A" today, and in future posts, I may tackle other letters and women creator/inventors.

The Apgar score has been helping newborns since the year 1952 when Dr. Virginia Apgar proposed a simple measurement to be taken one and five minutes after birth to determine the wellness of the child.

Dr. Virginia Apgar (1909–1974), an anesthesiologist, was the first woman to head a department at the Columbia College of Physicians and Surgeons. At the age of 29 she was named head of the newly formed division of anesthesiology.

The Columbia News explained Dr. Apgar's development of the evaluation system for which she is famous: "In the delivery room, she noticed there was no systematic assessment of newborns during the first critical moments of life. In answer to a medical student's question about how best to evaluate neonatal viability, she used a napkin to sketch the easily observable components of what became the Apgar score..."

In 2001 the New England Journal of Medicine reviewed the test and declared, "The Apgar scoring system remains as relevant for the prediction of infant survival today as it was almost 50 years ago." Below is a chart that simply explains the Apgar score.

Dr. Apgar's career took another path when she developed an interest in birth defects. She spent the last years of her life working with the March of Dimes.

Very cool, Diane. I remember that birthing classes taught us what the score meant but not who the score was named for.

Very cool - I knew it was someone's name. Didn't know it was an acronym too. And didn't know the someone was female.