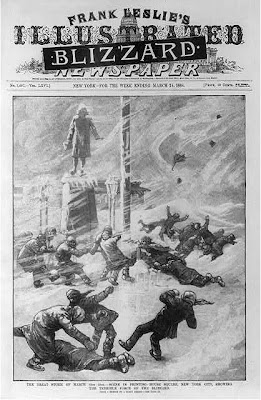 I don't know of anyone in the Northeast who grew up without a parent or grandparent telling a tale of "when I was younger the snow was so deep..."

Have you found yourself exaggerating the weather conditions of your youth?

Our kids, growing up with climate change, won't have any reason to be doubted when they tell their grandchildren of the winter of 2010-2011--the time when it snowed every week and sometimes twice a week!

I have an anthology of poetry published in 1937. In it is a short poem by Anonymous called "As to the Weather":

I remember, I remember,
Ere my childhood flitted by,
It was cold then in December,
And was warmer in July.
In the winter there were freezings--
In the summer there were thaws;
But the weather isn't now at all
Like what it used to was!

Isn't it nice to know that some things never change!

Visit my personal blog, Random Noodling, to read my response to this year's winter. Then head over to Great Kid Books for the Poetry Friday Round-Up.

Image courtesy Library of Congress
Posted by Diane at 12:01 AM

Perfect! When I was a child, part of the fun of walking to school in the winter was walking atop the snow bankings that lined the street. I felt on top of the world. I think this year, kids got to have similar experiences.

That is worth memorizing. :)

My kids have always assumed I was exaggerating when I told stories of being able to walk over the top of the swing-set, sticking out of the snow in the back yard. Now they've seen it. But of course, this is not necessarily encouraging. . .

Snow stories are like fish stories--they always seem to grow in the telling.