I had one of those light bulb moments over the weekend at Kindling Words. I was talking at lunch with Michelle Edwards and Jo-Ellen Bosson, and the subject was collecting old books, and especially tracking down books we loved as children. Jo-Ellen’s husband is a bookseller. So far, nothing unusual, a favorite topic and a conversation I’ve had many times. And then – someone mentioned Marguerite De Angeli. And I had the blinding realization of what a huge influence she is on my writing, and especially on my long-term Anglo-Saxon project. So I’ve pulled The Door in the Wall off my shelf for a lovely snow-day read, and I’ve ordered her autobiography from a used bookseller, and I’m off to rediscover this huge figure in children’s literature. (Mur, can I have dibs on her for the Pennsylvania book?)
Marguerite was born in Michigan, her family moved to Philadelphia when she was a young teen. Her father was an illustrator, and as a child she loved to draw and also to write stories. However Marguerite studied, not art or even literature but music. She was studying to be a concert singer when John De Angeli persuaded her that the traditional role of wife-and-mother should be her path. They went on to raise five children, moving frequently (John was a violinist.) Her creativity found its voice in storytelling, and what a legacy she left us!
Marguerite began her publishing career doing illustrations for Sunday School papers, moving on to magazines and to illustrating books by other authors, including Dorothy Canfield Fisher, Cornelia Meigs and Charlotte Yonge. Encouraged by an editor, she began to explore her own writing. Her first book (Ted and Nina go to the Grocery Store) was published when her youngest child was just seven, and her last, a collection of favorite poems, came out when she was 92!
De Angeli’s work gave voice to children from many different backgrounds, particularly minority and immigrant children, and of course the hero of The Door in the Wall is lame. In our day she would be heralded for the “diversity” of her books. She was meticulous in her research and her books stand the test of time.

Speaking of Bright April, perhaps the first American picture book to explore racial prejudice, De Angeli noted that she encountered a great deal of opposition when she began the work, and in fact that African-Americans were reluctant to talk with her, no doubt suspicious of this “outsider” presuming to write from that perspective. This is a conversation we have had over and over during my years in the children’s writing world: can (and should) a writer tell a story from the perspective of a group other than her own? De Angeli’s canon seems to answer that question with a resounding YES. She does this successfully both because of her research and because she believed that children are children, regardless of where and when they live. Her middle-American child readers could immediately identify with an Amish child’s school days, a shipwrecked Scottish boy’s quest for survival, the struggle of a Quaker child as an “outsider” in Philadelphia, and an African-American girl in a mostly-white Brownie troop. 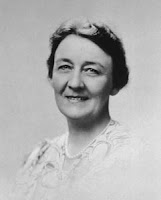 Marguerite said that she generally started a story with an image, and would draw for a while and then write for a while as the story unfolded. I don’t draw but I recognize the sense that the characters gradually reveal themselves, rather than being invented and walked through a story. That’s also a common theme of writers’ discussions.
So thank you, KW, for reminding me of Marguerite De Angeli. And thank you, Marguerite, for so many hours of happy reading in my childhood; and for showing us how authentic research-based historical fiction can be.
Posted by Sally at 8:54 AM

I don't believe I've ever read anything by De Angeli--I suppose I'd better get going!

The photo of her is telling. Joy, warmth, acceptance radiate from her face.

Really? Amazing.
In addition to the titles in the post, I think Thee Hannah and Skippack School are her best-known.

Thanks for telling me more about this wonderful author!

That's what I like best about KW -- those light bulb moments. Thanks for the continuing ed, Sally, and for a glimpse into a fascinating personality.

You may certainly claim Ms. De Angeli for the Pennsylvania book. I've put your name next to hers. :) Great post!