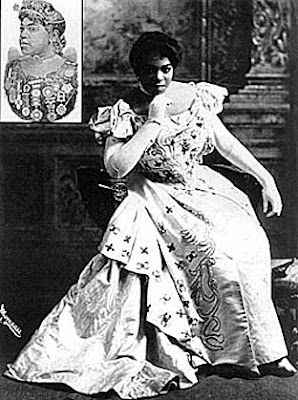 Her name was Matilda Sissieretta Joyner. Her family called her Sissy, and the world knew her as the Black Patti. She was a world renowned opera singer who sang for kings and queens and presidents, and yet few people today, even in the opera world, know her name.

Sissy was born in Virginia four years after the Civil War ended, so she never saw slavery. Her parents, who had been slaves, moved north to Rhode Island when she was seven years old hoping for better economic and educational opportunities. Rhode Island was pretty progressive for the time, and Sissy attended an integrated school with an integrated teaching staff.

Her father became Pastor in a church, and both she and her mother sang in the choir, and even then, her voice stood out from all the others. Her parents encouraged her to sing and by the time she was fourteen, she was enrolled in the Providence Academy of Music.

She was also married. That same year, she wed an older man named David Richard Jones who became her manager. Was it love, or did Jones see a longtime meal ticket in Sissy? I don’t know, but I do wonder.

In 1887, she studied at the New England Conservatory of Music and, a year later, she made her professional debut at Wallack’s Theatre in New York. She was an immediate sensation. She hit the high notes and the low notes and every note in between. She was dubbed ‘the black Patti’ after a famous white soprano of the time, Adelina Patti.

Sissy was noticed at that performance by a musical director who immediately telegraphed a theatrical manager he knew, and before she knew it, she was touring the West Indies. By the time she returned to America, she had built up enough of a reputation to begin getting bookings. She toured all the major cities, playing in music halls and expositions. She even sang at the White House for President Harrison. Day by day she became more and more famous, but it wasn’t until she sang at the Grand Negro Jubilee at Madison Square Garden that she became a household name. “I woke up famous after singing at the Garden, and didn’t know it,” she said.

She got herself an agent, the same man who represented Mark Twain. He got her more money than any black performer had ever been paid before. She was making $2,000 a week, a huge sum of money at that time, but Adelina Patti, her white contemporary, was making $4,000 for a single performance.

Still, it was enough for Sissy and David to live well. The traveled in a $35,000 private railroad car, and at David’s insistence, took many trips to London, where he subjected Sissy to arsenic treatments to lighten her skin.

And then came talk of her starring in an opera. In Aida. At the Metropolitan Opera House. Sissy couldn’t have been happier. It was what she had been working for all her life.

But as we all know, African-Americans at that time, no matter how talented, were only allowed to go so far. It was one thing for black performers to sing and dance for white people. It was another to be given a starring role. The talk and the opportunity quickly faded away.

How must she have felt? Crushed? Disappointed? Angry? Resentful? Maybe all of them. But she didn’t stop singing. She went to Europe and sang for kings and queens and princes. She sang in Asia and Africa and South America, and no matter where she went, her color was never an obstacle, except in her own country.

Still, she came back. America was her home. But by now, she knew there would only be certain places for her to sing. She formed her own group of singers and actors, comedians and jugglers, and called it the Black Patti Troubadours. She didn’t care for being known as the Black Patti. She preferred to be called Madame Jones, but she kept the name because that was how everyone knew her. 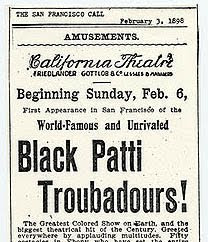 As leader of the Troubadours, it was Sissy who gave so many black performers of the time their start in show business. They played all over America to black and white audiences, and at the end of every performance, Sissy sang selections from operas. Things were going very well for her, and then she learned she was almost broke. Her husband, it seems, had gambling and drinking problems and spent most of their money. Sissy filed for divorce.

The Black Patti Troubadours stayed together for twenty years, but Sissy never recouped all the money she had lost. The money the Troubadours made went to pay expenses and keep her performers employed. By the time she retired, she had to sell her homes and her jewels to make ends meet. Still, she cared for her aging mother and raised two homeless children, all the while working at odd jobs to support them. Toward the end of her life, an acquaintance from the local NAACP paid her water bills and bought her fuel to heat her home. When she died of cancer in 1933, she was penniless.

It's sad to think that the only thing that stopped Sissy from achieving her dream was that white people had a problem with her skin color. I imagine she must have thought often of what might have been, but I doubt it was something she dwelt on. She didn't have the time. She was too busy living her life, meeting its challenges head on, and never giving up despite the pitfalls. She was too busy helping others even when she had little herself. I'm glad I got to know her.
Posted by Barbara at 2:10 AM

Oh dear, and still, today, we judge people by their skin color. Only now, people claim their judgments are based on a person's abilities or politics. Nobody's fooled.

Thanks for sharing Sissy's story!

Barbara - I was just reading about Sissy. So glad you've given her this space!

Her talent must have been enormous. How else would she have been heard? What an amazing story. Thanks for sharing, Barb.

What a magnificent looking woman!

Just wanted to let you know that I've written a biography about Sissieretta Jones that will be published in Spring 2012 by the University of South Carolina Press. For more information, visit my website, www.SissierettaJones.com. So glad you wrote about Sissieretta. She was quite a woman!

She was, Maureen! And she must have had a stupendous voice to garner that kind of fame among white people. From what I understand, there are no known recordings of her voice.

Looking forward to your book. Best of luck with it.