It’s not often that someone becomes famous for being a volunteer but that’s exactly what happened to Patsy Ann. Our volunteer had no family name and no family. Like Blanche Dubois, she depended on the kindness of strangers.

Patsy Ann was a purebred white bull terrier born in Oregon in 1929. She had been sent to 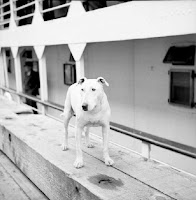 Juneau, Alaska by ship to become the pet of two little girls.

Unfortunately, Patsy Ann was born deaf. According the British Bull Terrier Club: “Totally deaf Bull Terriers …often find it very difficult to adapt to a normal life, are extremely difficult to train and will often not make suitable pets.”

Evidently this was the case with Patsy Ann. She was given to another family but that placement did not work out either. Soon Patsy Ann was roaming the capital city, living on handouts and bunking with the sailors at Longshoreman’s Hall.

Once Patsy Ann was on her own, she attached herself to the entire town. She was welcome in every home, shop, theater, and saloon. She gained weight from eating handouts.

Dock workers discovered that in spite of her handicap, Patsy Ann had an important skill. She could tell when a ship was on its way. No one knows how she knew but suspect she was able to discern the vibration of the ship’s engines. She would head to a dock and begin pacing, long before the ship was visible. She was never wrong. The mayor of Juneau named her the town’s official greeter.

Juneau’s citizens became very proud of their Patsy Ann. She was memorialized in post cards, on t-shirts, and eventually, a book about her life.

In the mid-1930s Juneau passed a law requiring that all dogs be registered and tagged. Some of the locals pitched in and bought Patsy Ann a beautiful collar and paid for her tag. Patsy Ann wore it briefly but got rid of it as soon as she could. The town knew better than to try and argue with their honorary greeter. Patsy Ann was given an official exemption to the law.

Patsy Ann died in 1942. She was given a sea burial in the Gastineau Channel. Fifty years later, a group raised funds to have a statue of the bull terrier created to honor her memory. Artist Anna Burke Harris of New Mexico was chosen to sculpt the statue. She writes:

“My ancestry is mixed, with a lot of Indian, Lakota and Cherokee. From these ancestors, who 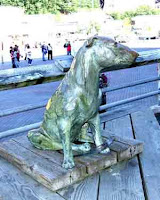 love and respect the earth and all its creatures, came the belief in "Spirit Pieces" whereby adding a piece of your spirit into the finished work will attain a small bit of immortality. And thus the bits of fur and hair from those who knew of Patsy Ann. They were honoring their own selves and their beloved animals. These pieces were pressed into the wax before the final bronze casting.”

Today visitors to Juneau are urged to visit the sculpture and "greet her and touch her and in leaving, carry with you the blessings of friendship through your life's journey".

To read more about Patsy Ann’s story and her statue go to:
http://www.patsyann.com/story/ and

Great story! Have you been to Juneau?

This is so cool. How did you hear of this notable pooch?

I love this story! Makes me want to go to Juneau. Kind of.

Never been to Juneau but desperately want to take a trip to Alaska at some point.

I found Patsy Ann the way we all find things: while researching something else.

I always wanted to take that cruise through the icebergs and see Sitka. Probably arn't any icebergs left or any Russian influence in Sitka.

And Patsy Ann? I always believed it takes a dog to raise a village.