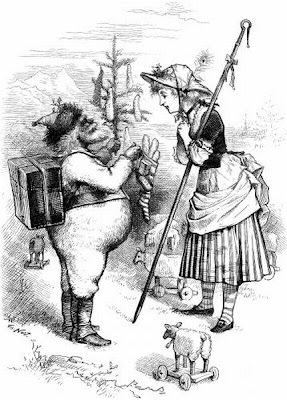 If you haven't visited the Project Gutenberg site in a while, then stop by soon. They have taken the plunge into providing ebooks for the Kindle reader as well as Android devices. And, as always, you can read the books on a computer. There are now more than 36,000 free titles, with new titles being added daily!

The books are those that have entered the public domain, which means that most were originally published before 1923.

Some people turn up their noses at the idea of reading books published before 1923, but somehow these people forget about all the classics like Jane Austen's works, or those of the Bronte sisters. Tell me you wouldn't be interested in reading Wuthering Heights again!

Project Gutenberg is also a source for items that would be difficult to find in modern libraries, such as memoirs of once famous people. And, if you're researching a time period before 1923, check out some of the then popular magazines such as The Atlantic Monthly, Harper's Young People: An Illustrated Weekly (note: the illustration at the top is from the December 23, 1879 issue), or Lippincott's Magazine of Popular Literature and Science.

In the September 1864 edition of The Atlantic Monthly I found an article entitled "The Electric Girl of La Perriere." It begins,

Eighteen years ago there occurred in one of the provinces of France a case of an abnormal character, marked by extraordinary phenomena,—-interesting to the scientific, and especially to the medical world. The authentic documents in this case are rare; and though the case itself is often alluded to, its details have never, so far as I know, been reproduced from these documents in an English dress, or presented in trustworthy form to the American public.
....

The weather, for eight days previous to the fifteenth of January, 1846, had been heavy and tempestuous, with constantly recurring storms of thunder and lightning. The atmosphere was charged with electricity.

It seems a poor prepubescent girl, Angélique Cottin, became endowed with electrical powers after the week of wacky weather. The fascinating story goes on to document the numerous learned and not-so-learned people who attempted to explain the young phenom. For today's reader, it's a look into the way superstition and science existed side-by-side. Fascinating and FREE reading!

If you, as a reader, would like to give back to Project Gutenberg, they are always looking for donations of both money and time. Volunteers are needed for several projects, including proofreading. Learn more here.

Very cool! Now that I've got my android phone, I can take books anywhere without using up too much space in my bag. Gotta learn what happened to "Electric Girl." :)

Oops. The link above will bring you to more about Angelique.