I suppose everyone is familiar with this small poem by Carl Sandburg:

It sits looking
over harbor and city
on silent haunches
and then moves on.

This poem is found in many children's anthologies because of its utter simplicity and beauty.

Sadly, I didn't know much about Sandburg other than he was a poet, wrote a massive biography of Abraham Lincoln, and he was married to the photographer, Edward Steichen's sister, Lillian. (I had read, and was entranced by, a biography of Edward Steichen many years ago, but that's a story for another time.)

Last week I happened upon the PBS American Masters' program, "The Day Carl Sandburg Died." It was a fascinating look at a multifaceted man. I'm so glad to have seen it; click on the link and you can watch it, too. 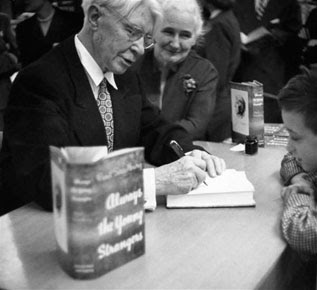 The most surprising part of the film was the mention of two U.S. presidents, Franklin Roosevelt and John Kennedy, consulting with Sandburg, a poet, during times of crisis. Imagine that. Today, we have a presidential candidate who wants to eliminate funding for one of the last places Americans can find poetry and poets still celebrated--PBS.

Carl Sandburg's last home in North Carolina has been made into a National Historic Site, and from the photos on the website, it looks gorgeous. Also on the website is a virtual Sandburg museum where you can learn more about Carl and his family.

Perfect for today, Diane. There's a fog cat sitt'n in my yard this morning.

I love the short and meaningful ones. This one is perfect for Autumn.

I simply ADORE that Sandburg poem. When I taught First grade we always learned a poem on Wed. Helps with reading, and the kids love to memorize them. That was one of the first ones we did, in the fall, when there is often fog over the city in the morning on the way to school. Perfect! Enchanting! The man was a genius. Thanks for sharing.

I love this Sandburg poem, but I haven't widely read him. I wish all of his poems were as condensed and gorgeous as Fog. I shared a Sandburg poem last week for PF--one I hadn't seen before and loved. Thanks for sharing that video. I hope to watch it this weekend.

Sandburg is worth studying a little more closely. I think he's someone whose name is easily recognized, but when it comes down to it, you find you don't really know...except for his "Fog."

There was so much breadth and scope to Sandburg, and thank you for the American Masters link. Can you imagine life without PBS? As they say, elections matter....