Just plain living can provide inspiration for a poem, but sometimes, you need something more. I like to use photos as a starting place. Someone a little more accomplished than I am, Walter Dean Myers, also uses photos. Brown Angels: An Album of Pictures and Verses (HarperCollins, 1993) and Glorious Angels: A Celebration of Children (HarperCollins, 1995) are the stunning result.

I'll share one of my favorite photo resources--the Library of Congress. The Prints and Photographs Catalog is superb, and the amazing part is, not all of the collection is digitized, so there may be thousands more photos to come in the future! Browsing can be a real time eater, though, so beware--you may find it addictive. What to search for? Anything. Pick a word like "sisters" and type it in. I did, and one of the many results turned out to be a poster of the Meers Sisters. 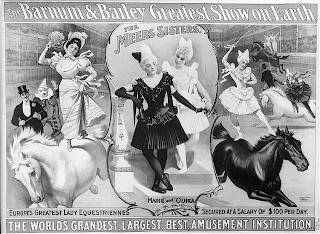 There are many other fabulous results to explore such this photo taken by the Gerhard Sisters: 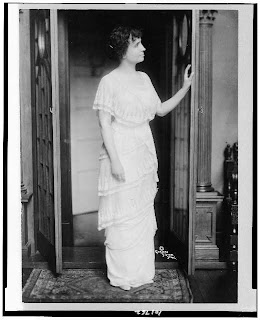 Do you know who this woman is? Look for the answer below.
Or this one that had as a description: 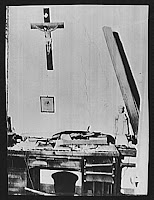 Where two Catholic sisters died in Nazi bombing raid on Algiers. Two Catholic sisters were praying before this crucifix in a convent in Algiers when German dive-bombers almost demolished the building, killing them and thirteen other nuns. The fifteen sisters killed and three who were severely wounded, remained in the convent at prayers when the raid started while other sisters guided sixty orphans from the building to the safety of an air raid shelter. Mother Superior Marie Duval, who had lived at the convent for thirty-one years, was among the victims. She was awarded the French Legion of Honor posthumously by General Henri Honore Giraud, civil and military commander-in-chief of French North and West Africa, whose citation said, in part: "On April 17, 1943, she was a victim of German barbarism, as were fourteen of her sisters."

The description, combined with the photo, could easily lead you to a poem, or, a whole novel!

Here's photo of twin sisters, Winnie and Jimmie, who were spinners in a Mississippi mill in 1911: 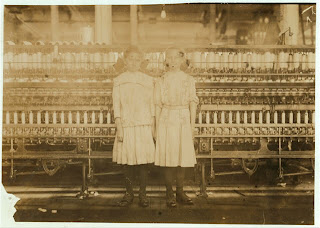 Browse online, or go through your box of personal photos, and I'm sure you'll be inspired to write!


Answer: the woman in the photo is Helen Keller

Many thanks for the warm welcome at the Poetry Friday Round-Up this week hosted by A Year of Reading! Read about all the P.F. participants here.
Posted by Diane at 1:30 PM

km
Thanks for the heads-up about this great resource!