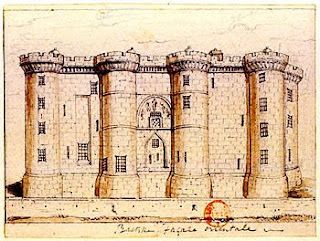 Today is Bastille Day. On July 14, 1789, the citizens of Paris, France attacked the Bastille, a French prison. It wasn’t heavily guarded, and there were only seven prisoners inside, but there was gunpowder to be had, and arms which could be used against the King’s army. The people attacked, the Bastille fell, and the French Revolution had begun in earnest.

In the spirit of Bastille Day, I’m suggesting you rise up and start your own rebellion.

No, I’m not suggesting you try to overthrow a small country, but you could confiscate a small room or space in your home for that office you’ve always wanted. And you don’t have to put the Royal Family to the guillotine, but you could shut the door on them for a few hours to give yourself some undisturbed writing time. Looting the palace coffers might be a good idea, too. It could get you to that longed-for writers’ conference or workshop, or buy you a new computer or laptop.

It might be scary at first, especially if you’re the type who has never picked up a pike

before. And it could even get rather messy. In the end, you might find you have to take a head or two. But no one said this would be easy. Rebellion seldom is. Still, when you’re sitting in the cool shade of a tree in your back yard, typing away on your new wireless lap top, instead of sweltering at your computer in the house, I’m sure you’ll agree it was worth it.

So on this Bastille Day, take out your pike. Raise it in the air and announce to the world that you are a writer. Declare to the powers-that-be that your writing is just as important as music lessons, NASCAR, and Little League. And if the Royal Family isn’t impressed, put a head upon that pike. They’ll come around.

But be warned. Nobody’s reign lasts forever. So enjoy it while you can.

Vive la revolution!
Posted by Barbara at 1:23 AM

Oh, Barb, we should have figured your first posting would feature guillotines and heads on pikes! FABULOUS JOB!

Hey, someone has to represent the dark side!