We are Washington Bound! 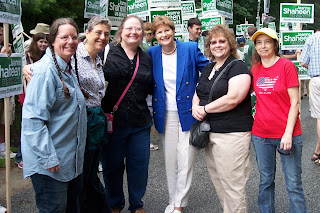 After spending a good part of the last year writing profiles for the Women of series, it was a kick to actually meet one of our subjects. Former New Hampshire governor Jeanne Shaheen was slated to march in the Amherst 4th of July parade, and we took the opportunity to connect with her. She's in the midst of her senatorial bid, but we were able to nab a few moments of her time before she lead dozens of her supporters down Main Street.

What an incredibly gracious woman! Governor Shaheen was happy to learn that the New Hampshire Center for the Book selected Women of Granite to be the featured New Hampshire book at the National Book Festival in Washington, D.C. this September. This means at least seven New Hampshire women will be heading to D.C. this fall!

Posted by Andrea Murphy at 4:36 PM