Mary Dyer represents a kind of single-minded passion that is at once frightening and admirable.

Little is known about her early life. She and husband, William Dyer, emigrated to the Massachusetts Bay Colony in 1633. Mary gave birth to seven children. All but one survived into adulthood.

The dead baby, whom Mary birthed in October 1637, presented powerful fodder for no less than the Colony's governor, John Winthrop. 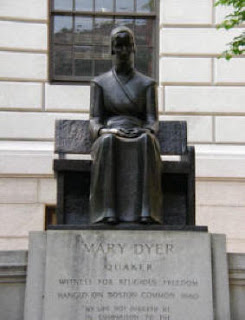 Mary and William had formed a friendship with the Anne Hutchinson – an outspoken woman who infuriated the Puritan leadership with her ideas of racial and gender equality. Anne had plenty of followers. Of course, the Puritans felt threatened by all this free-thinking. They brought Hutchinson to trial for heresy. After a long trial, where Anne defended herself brilliantly, the Puritans banished her from the Colony forever.

Mary so believed in Anne and her ideas, she was the only one who joined the newly banished Anne as she exited the meetinghouse for the last time. It's likely Mary knew this would bring the wrath of the Puritans on her.

Winthrop wasted no time in digging up dirt on Mary Dyer. Rumor had it, the baby who'd been stillborn, had also been horribly deformed. Winthrop ordered the body exhumed, and then published a description of it:

“it was of ordinary bigness; it had a face, but no head, and the ears stood upon the shoulders and were like an ape’s; it had no forehead, but over the eyes four horns, hard and sharp; two of them were above one inch long, the other two shorter; the eyes standing out, and the mouth also”

This was, of course, a total sham. Winthrop needed Mary gone. She and William followed Hutchinson and Roger Williams to Rhode Island after they were banished.

Mary lived in relative obscurity until she and William took a trip to England in 1652 where she became a Quaker. She returned to America at a time when the Puritans were rabidly persecuting Quakers. The punishments meted out by the Puritans were truly horrifying: ears cut off, tongues bored through with hot pokers, and death if the Quakers persisted in worshiping in the Colony.

Mary's story is one of passionate persistence. Knowing she risked death, she returned to Massachusetts again and again. She stood upon the gallows with a noose

around her neck and watched as two of her fellow Quakers were hung. A last minute reprieve arranged by her husband was rejected by Mary, and she had to be physically removed.

Mary returned again, and was eventually hung by the Puritans. Her death eventually led to new religious tolerance in America.
Posted by I'm Jet . . . at 8:08 PM