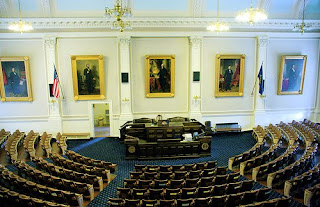 
Today, I'm not going to write about one of the women I've profiled for the Women of... series, instead, I'm going to tell you about the ladies of New Hampshire's Senate and House of Representatives (a.k.a New Hampshire's General Court).

In the election of 2008, women became the majority in the New Hampshire Senate where they hold 13 out of 24 seats. Not only that, the President of the Senate is a woman, as is the Speaker of the House! This makes New Hampshire the only state in the country where women lead both legislative chambers!

Percentage-wise, New Hampshire does not lead the states with women legislators, but it is pretty darn close. Colorado is first at 39%, New Hampshire is second with 37.7%. Keep in mind, though, that Colorado's legislative has 100 members, whereas New Hampshire has 424!

The first New Hampshire women legislators (two of them) were elected in November of 1920. This was shortly after women were given the vote as a result of the passage of the 19th Amendment to the Constitution on August 20th of that year.

Jessie Doe and Dr. Mary Louise Rolfe Farnum won the 1920 election with write-in votes since the 19th Amendment was passed after the closing date to file to run! Let me repeat that--they won as write-ins! By 1924, more than a dozen women ran and won seats in the legislature. Today we have 147 women in the New Hampshire House of Representatives!

Moving forward 60+ years we see Jeanne Shaheen being elected New Hampshire's first woman in the U.S. Senate on November 4, 2008. (Jeanne Shaheen had earlier made history by becoming the state's first woman governor.) It's taken a little time to get our women on the national stage, but we're making progress!

Update: Today, 2/12, Judd Gregg declined the position of Secretary of Commerce and will remain in the Senate thereby negating Lynch's appointment.
Posted by Diane at 8:04 AM