The NOAA weather report this morning said it may be 50 degrees outside this afternoon, and my back pasture is still covered with snow and ice -- which leads me to my old Robert Frost volume and this poem: 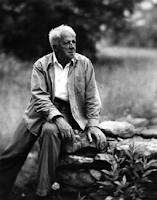 To think to know the country and not know
The hillside on the day the sun lets go
Ten million silver lizards out of snow!
As often as I've seen it done before
I can't pretend to tell the way it's done.
It looks as if some magic of the sun
Lifted the rug that bred them on the floor
And the light breaking on them made them run. 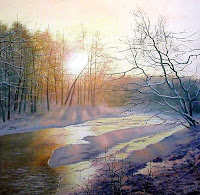 But if I though to stop the wet stampede,
And caught one silver lizard by the tail,
And put my foot on one without avail,
And threw myself wet-elbowed and wet-kneed
In front of twenty others' wriggling speed,--
In the confusion of them all aglitter,
And birds that joined in the excited fun
By doubling and redoubling song and twitter,
I have no doubt I'd end by holding none.

It takes the moon for this. The sun's a wizard
By all I tell; but so's the moon a witch.
From the high west she makes a gentle cast
And suddenly, without a jerk or twitch,
She has her spell on every single lizard.
I fancied when I looked at six o'clock
The swarm still ran and scuttled just as fast.
The moon was waiting for her chill effect.
I looked at nine: the swarm was turned to rock
In every lifelike posture of the swarm,
Transfixed on mountain slopes almost erect.
Across each other and side by side they lay.
The spell that so could hold them as they were

Was wrought through trees without a breath of storm
To make a leaf, if there had been one, stir.
It was the moon's: she held them until day,
One lizard at the end of every ray.
The thought of my attempting such a stay!


Thaw by Yelena Salakhova, 2006
see more wonderful paintings from this artist and others on the Art and Faith blog: http://01varvara.wordpress.com/2008/01/

Moon on snow is free clipart from http://www.freeclipartnow.com/nature/weather/snow/

Poetrt Friday is hosted this week at http://favoritechildrensbooks.blogspot.com/
Posted by Sally at 9:50 AM

Both are very lovely poems. I hadn't heard either of them. At least I can't remember having heard the Frost poem.

Great photo of him!