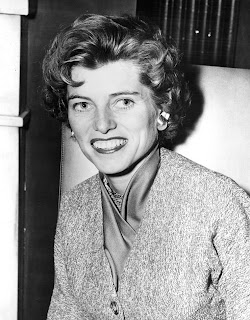 Eunice Kennedy Shriver was Grace Curtis's best friend. Grace was born the fourth of eleven children nearly 90 years ago in Beverly, Massachusetts. Within a year or so of her birth the fifth child arrived, followed not long thereafter by the sixth. In a family of that size, babies don't stay babies very long.

Although Grace wasn't talking, she potty-trained at a reasonable age and managed to blend in with her growing sibling group. She loved music, and often sat on her mother's lap while Lydia played the piano and sang songs with the family. Soon, Grace was picking out tunes on the piano and singing nonsense lyrics. Her favorite song was Everybody Works But Father, much to the delight of her father, Carl, who called her Plucky.

As the years ticked by it became abundantly clear that Grace was enormously challenged by the simplest things. Nevertheless, it was still a huge shock when the doctors declared Grace profoundly retarded. With the babies still coming, there was nothing to do but put her in The Walter E. Fernald State School in Waltham.

Formerly known as the Massachusetts School for Idiotic Children, Fernald was a snake pit. Still, it was the best alternative at the time. In fact, Carl and Lydia had a hell of a time getting Grace admitted. After much string pulling by a well-connected Henry Cabot Lodge, Jr. (for which the family is still grateful) that Gothic horror show opened up for Grace. She was placed in Fernald shortly before the birth of my mother in 1927.

Elsewhere in Massachusetts, at just about the same time, another family struggled with a daughter's intellectual disability. The Kennedy family had power, wealth and resources that the Curtis family could only dream of. Although disabled in much the same way as Grace, Rosemary Kennedy would live a protected and secure life. The Kennedys would see to that. Nobody would ever pull all their 12-year old daughter's teeth because she bit an abusive attendant. Rosemary wouldn't carry scars on her back from whippings received at the hands of her guardians, either.

Christ only knows what other abuses and indignities Grace suffered at the hands of her keepers. She certainly couldn't tell. She and thousands of other "idiotic children" were voiceless, powerless, and invisible to society. This is where Eunice Kennedy Shriver comes into Grace's picture.

Eunice may have been Rosemary's baby sister, but she was also her biggest advocate, protector and best friend. Eunice watched out for Rosemary and made sure she was included in the swirl of activities surrounding the Kennedy family. When Rosemary's disability became such that she had to be institutionalized, Eunice could easily have taken her place among the idle rich. Instead, she threw herself into service of others.

She became a social worker and worked with women prisoners in West Virginia and juvenile offenders in Chicago. Eunice was the driving force behind everything her brother, President John F. Kennedy, did for people with intellectual disabilities. Eunice became Grace's voice.

Things started really turning around at Fernald in the early '70s, thanks to people like Eunice Kennedy Shriver. In fact, if you were to drive onto the Fernald campus today, the first building you'd pass is the Eunice Kennedy Shriver Center. Special Olympics, which Eunice founded in 1968, brought unimagined joy to Fernald residents, including Grace.

Grace is still a Fernald resident. Despite the brutal years, Fernald is Grace's home. These days, it's a much happier place, in spite of Governor Deval Patrick's attempts to close it down and place the residents in community homes. What a colossal tragedy that would be for Grace and the other "lifers" who are finally living dignified, fulfilling lives in the only home they've ever known.

Grace is now receiving hospice care, and hopefully will be reuniting with her mother and father very soon. I'd like to think that when she does, her back will be smooth and her mouth full of pearly whites.
Posted by Andrea Murphy at 12:15 AM

Sh*t, you never told me that Grace had all her teeth pulled! Absolute barbarism. We should all be ashamed.

The irony of the situation that developed out of Dorothea's efforts to create humane homes for the retarded and insane . . .

When the issue is something so far removed from everyday life for most folks, it's difficult to drum up interest and support. Sadly, people like Dorothea and Eunice can only do so much.

Thank you for sharing this, Andy. What a powerful testamony to the changes that have occurred in our lifetimes.

This brought tears to my eyes.

I never knew. Thanks for sharing that, A.