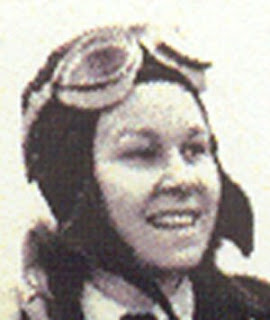 I love oral histories, and I love women who fly, especially those who flew in the early days. I tend to write their profiles for our Women of . . . series.

Roberta Boyd Sandoz Leveaux will likely never be featured in one of our books, but her story is as compelling as some of the bigger names in women's aviation. She flew for the British ATA -- the Air Transport Auxiliary. Early in their war involvement, the Brits realized they'd need to press all able-bodied pilots into service (much earlier than the US considered it during its involvement.)

The Brits hired Jackie Cochran to recruit women pilots. This is a story in itself, and has been covered elsewhere.

The website where I found Bobbie Sandoz's oral history is an important project. This is In The First Person's description of the creators' project:

In the First Person is a landmark index to English language personal narratives, including letters, diaries, memoirs, autobiographies, and oral histories. Working with archives, repositories, publishers, and individuals we've indexed first person narratives from hundreds of published volumes—those that are publicly available on the Web and those that are held by repositories and archives around the world. Our intent is to make it possible to find and explore the voices of more than 300,000 individuals.

WRIGHT: Today is March 25, 2000. This oral history is being conducted with Roberta Boyd Sandoz Leveaux.
Our topic today is her career in aviation that started many years ago. We would like for you to tell us, how did you get interested in aviation?


LEVEAUX: As a child, we up in the northeast corner of the state of Washington, we were on a migration flyway for geese. I had a fascination for geese flying in a wonderful formation in the sky. As a little kid, I remember hearing my mother say to my father, as I sat outside in my wagon waiting for the geese to come, "Do you think she's all right?" [Laughter]

I wasn't much for dolls, but I was fascinated with the sky, I guess. Do you know what a barnstormer is? Well, one came to the little town of Marcus, Washington, which is now under water 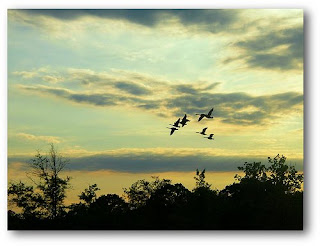 because of the Grand Coulee Dam. Landed in a farmer's field, and we heard about it. I think I was a nag. Mother said, "No," and my father took me in secret. I was ten years old. The family story is, I asked the pilot so many questions, he gave me another ride. I saw the roof of my own house, saw my schoolhouse. Until the eighth grade, I rode a horse to school. The barn was larger than the schoolhouse. So it was a real country setting.

(the beautiful flying geese picture is from
flickr.com -- kenny42952)

But I kept that flight in mind, and being an only child and kind of a tomboy, very closely restrained, so when I got out of college, took my farthest away job offer, which was in San Francisco [California] and nearly starved to death spending my social work salary on flying time. Eventually the man who was teaching me—flying time then, if you can believe it, was five, six dollars an hour. Isn't that something? He recommended me to a civilian pilot training program. It was a group of ten, and they allowed one woman per program, and I was that gal.

It was wonderful training. It really saved my life a couple of times when I was in England. I took the second course, as well, which was aerobatics, which convinced me an airplane can be recovered from just about any old position.


I worked for a farmer in the San Joaquin Valley, as he had a lot of extended holdings. Elmer von Gom [phonetic]. Gosh, I haven't thought in sixty years. We landed on roadways in his fields. Sometime in there, I think just after civilian pilot training, I invested in a Porterfield Tandem, small 65-horsepower, with a partner who was a mechanic. Our deal was, I was to teach him to fly, and he was to keep the airplane in shape. It was a good deal.

After von Gom, I worked for a construction company. Actually, we had quite a forewarning of the Second World War. It was called CT&WP Stover of Claremont, California. I was the pilot for their estimator. They were building airfields in California, military airfields. It must have been late 1940. Pearl Harbor wasn't until the seventh of December, so we were certainly preparing. Meantime, having grown up on the Canadian border, I was very impressed with the English people in Canada.


You know, starry-eyed teenager, I thought, "Oh, aren't they wonderful. Don't they sound terrific." So I wanted to go help England fight their war, win their war, which started—you won't remember, but it started in September '39. So I made myself ridiculous by writing to the British Air Ministry and the RAF [Royal Air Force], and really didn't get any response until one from Canada, who told me to get in touch with Jacqueline Cochran. That would have been about October or November '41.

Eventually, I got a telegram from her. Those were the days when you received a telegram, you sat down before you opened it. Telegrams were a couple of lines, usually bad news. Well, in Cochran style, this was a page and a half. [Laughter] The stuff that really thrilled you, and there was the word "secret" in there. I wish I had a copy to show you. "Do not contact the press." Really undercover stuff. 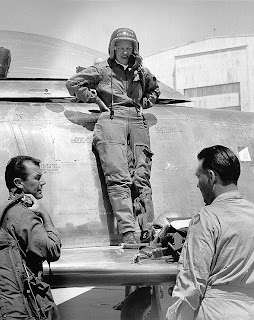 We eventually got in touch. She came out to Fresno to interview me. I didn't like her very much in the beginning. I had thought this lady is from New York and she's rich. I never dressed up very much, but I made a big effort, never wore much makeup, but made a big effort, and I think I must have looked like a floozy. [Laughter] But she was very hard on me. Said, "This is not a glamorous job. You're going to be cold. You're going to be hungry." Kind of abrasive.

WRIGHT: What did she tell you that you would be doing? Did she explain it fully?


LEVEAUX: Ferrying aircraft for the Royal Air Force. In the Battle of Britain in 1940, they lost, oh, I think over half of their pilots and the aircraft. Jackie had heard, I think it was someone called Harris, from the British Air Ministry, talking to Congress, and he was trying to arrange training in this country for British pilots and asking for volunteers. The sentence that really turned Jackie on was, "We are so desperate for pilots, we are even trying an experimental group of ten women." Ten British women were flying trainers at that time.

So she got herself to England and made arrangements to bring, it was some grand number like fifty qualified pilots, and, of course, there weren't that many. But I was one of that group. The British sent a check pilot to Montreal [Quebec, Canada], and we went to Montreal. Some of the most qualified people, I think, didn't go to England, which is a shame. But those were openly chauvinist days, and if you argued with a check pilot, that was considered inability to fly, I guess. I shouldn't—that's off the record. [Laughter] 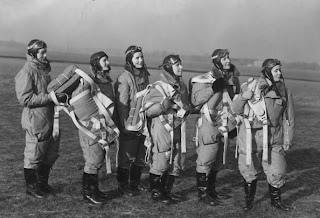 But some good people didn't go, certainly much more qualified than I, more hours than I had, which was kind of sad. Anyway, we went in small groups of two, three, four. Someone asked why. The answer was, so you won't all be lost at once.


The North Atlantic was very treacherous. This was early 1941, and I went with three other girls from St. John, New Brunswick, in a small Norwegian freighter. It went not in convoy, because it had a few knots faster than the known U-boat speed at that time.

Thanks for the story--and the great site, Jet!