If you’re like me, the idea of doing a writing exercise when you have an assignment to do (or a great-American-novel begging to be written) feels like a waste of time. It also carries a whiff of the classroom, and as someone who hated writing in school, that whiff is often enough to send me off in search of a closet to clean or an errand to run. 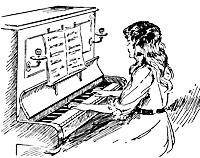 Still, like playing the piano, writing is both a talent and a skill. As a skill, it improves with practice. We know that concert pianists still play scales and drills as well as practicing the music for their next shows – why do we think writers should only write for publication?
In addition, like finger exercises, writing exercises can also be used as warm-ups for writing the “real” work. As such they often serve as block-busters (in the sense of busting through writer’s block), getting you into the BIC* position with fingers on the keyboard without the looming threat of having to produce something. (Sometimes your exercise will even produce material you can use in your work for publication – but don’t plan on that or you change the dynamic.)
Just as with playing the piano, there are lots and lots of writing exercises, but only so many variations on a theme. Over my next few Mentor Mondays I’ll be collecting and improvising upon some oldies-but-goodies from the writing exercise bag of tricks. Each post will focus on a different purpose for the exercise.
This week’s exercise will build on the Mentor Monday series on Voice from earlier this year (see January 31, March 7 and April 11). It is intended to exercise your skill with developing and maintaining a point of view. 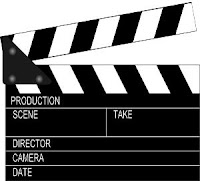 “Point of view” shifting is a common problem for beginning writers, and one that can challenge even experienced writers. Based on my occasional freelance critique work, I believe this is a particularly difficult problem for people who watch a lot of movies or television drama. Those genres allow the writer to move from one character’s point of view to another without confusing the “reader” (in this case, viewer). The visual format allows for all kinds of cues: fade-outs, scene changes, even music create the transitions. It turns out this is very bad training for the mind of a would-be writer.
Written works can employ more than one point of view, but it is much more difficult to do effectively. For younger readers multiple points of view are essentially verboten. This means that everything that happens in the story has to be observed or experienced by the protagonist, and described in a way that is natural for that character.
Exercise: Pick a story from morning news, preferably one that involves one or more children. Write collection of narratives based on this account from the point of view of every person possibly involved. Note, this is an exercise. You are free to remain as true to the actual event as possible, or to embellish it wildly. The news story serves only to get you past the need to think up an idea. I just saw a story about a porch collapsing at a Father’s Day party, sending multiple people to hospital. I don’t know who was at the party, but for my exercise it will include at least three generations of family members so I can have distinctly different voices and points of view. In addition to the various attendees at the party, the actual news story included interviews with neighbors and the police, fire and rescue responders, giving me even more points of view to explore.
*BIC = Butt in Chair - the essential "secret" to all writing success - although with the growing popularity of treadmill and other standing desks, it may need revising. See Mary Heaton Vorce, purportedly the originator of “The art of writing is applying seat of pants to seat of chair.”
Posted by Sally at 8:36 AM