My search for the source of the “apply the seat of the pants to the seat of the chair “ quote the other day drew my attention to Mary Heaton Vorse (1874-1966), a writer of whom I knew almost nothing. Being a curious sort, I resolved to look into her – and a fascinating character she was!

Mary was born in New York City to a very wealthy family, grew up in New York and Amherst, Massachusetts, travelled extensively and became fluent in several European languages. At 22 she went off to study at the Art Student’s League in New York, which I have previously read about in the stories of Hilda Belcher and Georgia O’Keefe. There she met a number of women (and a few men) who were active in political causes, especially women’s suffrage. She also discovered that she didn’t really have a talent for painting.
In 1898 Mary married a journalist who encouraged her to develop her writing instead of her painting. They moved to Provincetown in 1906, where Mary gave birth to two children and several books. Her husband died in 1910 and in 1912 Mary married another journalist, Joseph O’Brien. Joseph was quite a radical and through him Mary was re-introduced to politics, becoming a friend of Elizabeth Gurley Flynn and turning her pen to the causes of workers' rights, suffrage and pacifism. By all accounts this was a very happy, friendly marriage and resulted in the birth of a third child before ending tragically with Joe’s death in 1915.
During the years of the First World War Mary wrote extensively in opposition to the war, as well as articles about labor (particularly the plight of child laborers and women) and the problems of the working class. While she wrote for radical papers such as The Masses, her articles also appeared in magazines with national readership: Atlantic Monthly, The New York, Harper’s, The New Republic, etc.
Mary was one of the founders of the Provincetown Theater group, working with a number of better-known (today) writers including Edna St. Vincent Millay and Eugene O’Neill. She was also a founder of the Women’s Peace Party (with Jane Addams and other names more familiar to us today), which formed in 1915 in opposition to American involvement in World War I. 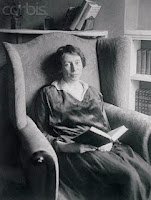 In the early 1920s a miscarriage and a failed love affair dragged Mary into alcoholism, but she overcame the addiction and went on to write several more books and hundreds of articles. Clearly she lived the adage for which she remains known: “The art of writing is applying the seat of the pants to the seat of the chair.” An inspiration to all of us who hope our writing will make a difference, Mary continued to live in her beloved Provincetown until her death at 92. She should be better known!
Posted by Sally at 8:48 AM

I love being introduced to new-to-me women. Thanks, Sally.

Sally, I think you meant NH's own, Elizabeth Gurley FLYNN. You may have confused her with Helen Gurley Brown. ;-)

Good pick up, Diane - that's what happens when you post in a hurry!! I'll fix my apostrophe error at the same time.

Well, another lady to go in our "maybe next time" list. I guess she spent most of her time in MA?